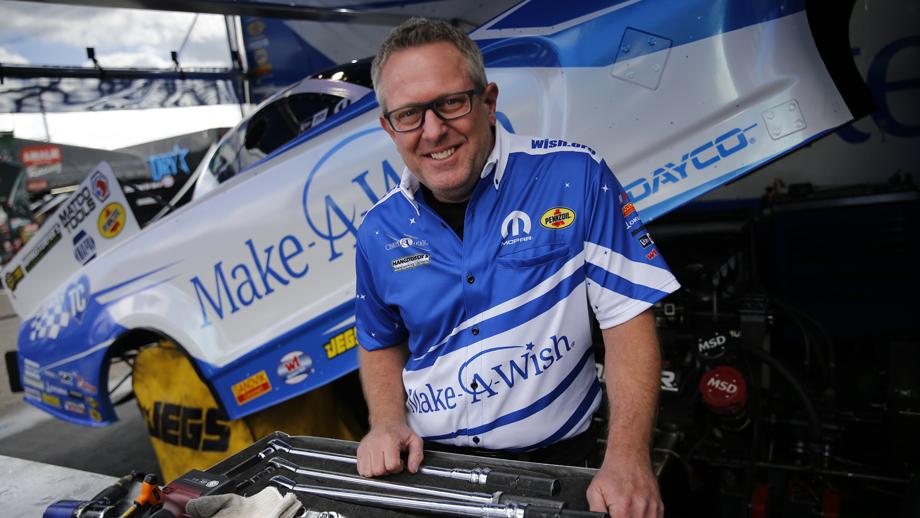 Tommy Johnson Jr.’s first trip to Wild Horse Pass Motorsports Park, the site of this weekend’s 35th annual Magic Dry Organic Absorbent NHRA Arizona Nationals, as a nitro driver came in 1989. With the race marking the 30th anniversary of his Top Fuel debut, the now Funny Car championship contender reflected on what three decades of nitro racing has taught him.

“You can definitely see where being a veteran and having experience pays off,” said Johnson, who has 17 career wins. “I want to use that now. I think it’s all about maintaining focus throughout the year. It’s a long season and you can’t let the lows get you down or let the highs distract you. That comes from years of experience. When you’ve been there and done that, it helps keep you on track. Being a veteran, it gives you a whole different mindset on racing.”

With that in mind, the track just outside of Phoenix holds a special place in Johnson’s heart and he will look to grab his second career win at the early-season NHRA Mello Yello Drag Racing Series race. The Don Schumacher Racing standout lost in the final round of the race a year ago, but is off to a strong start in his 10,000-horsepower Make-A-Wish Dodge Charger SRT Hellcat.

Johnson advanced to the semifinals at the 2019 opener in Pomona as he tries to take it a step further in Phoenix. Steve Torrence (Top Fuel), Courtney Force (Funny Car) and Chris McGaha (Pro Stock) were last year’s winners of a race that will once again be televised nationally on Fox Sports 1 (FS1), including live finals coverage starting at 6 p.m. ET on Sunday, Feb. 24. It is the second of 24 races during a 2019 season where Johnson may already be ahead of schedule.

Despite missing out on a win in 2018, Johnson was impressively consistent and finished third in points, finishing off the year with a final round appearance in Pomona. The team left well enough alone, made very little changes in the off-season and picked up where they left off last November. Johnson feels the team is ready for a breakthrough.

“It speaks well to the consistency of our tune-up and we’re racing better earlier in the year than we ever have,” said Johnson, who is looking for his first win since the 2017 finale heading into Phoenix. “We made minimal changes as far as what we did in the off-season and came out and ran well. For our confidence level, that’s tremendous. We ended the season on a really high note and to continue that after a long break, that’s pretty important.”

Johnson qualified third with a 3.904 at 327.03 mph in Pomona and then went as quick as 3.876 in eliminations en route to the semifinal finish. For a team that is admittedly a slow-starting one, it was a good way to begin 2019. Of course, Johnson wants a victory in Phoenix and to do that, he’ll have to get past Pomona winner and 2017 world champ Robert Hight, defending world champ J.R. Todd, 2016 champ and DSR teammate Ron Capps, Shawn Langdon and Jack Beckman.

“History shows it’s hard to keep your performance all season, but it’s definitely easier if you have it right away than it is to try and find it,” Johnson said. “I’m sure there will be a point in the season where we have to get back on track, but our focus is trying to maintain this. To get into a flow right off the bat is big, and to have a car that runs well no matter the conditions is super encouraging.”

To purchase general-admission or reserved seats for the Magic Dry Organic Absorbent NHRA Arizona Nationals, call 877-840-0457 or visit https://racewildhorse.ticketforce.com/. Kids 12 and under are free in general admission areas with a paid adult. To honor the Salute to First Responders, military and first responders can save 20 percent on general admission tickets at the gate.