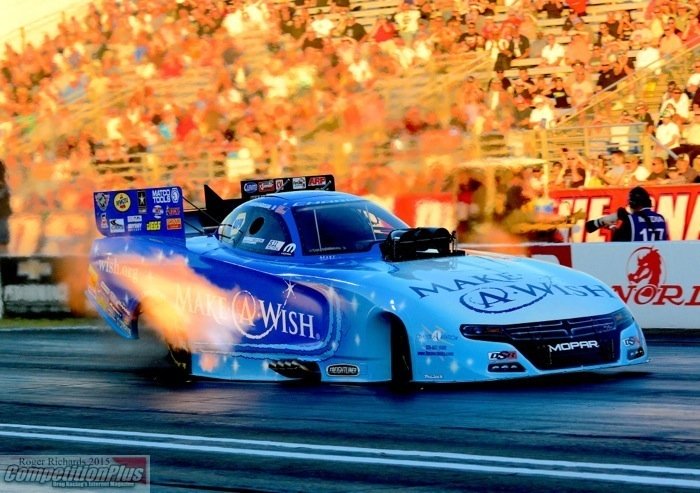 There have been a slew of crew chief and crew member changes with the Don Schumacher Racing teams this offseason – but not with the Make-A-Wish Nitro Funny Car driven by Tommy Johnson Jr. 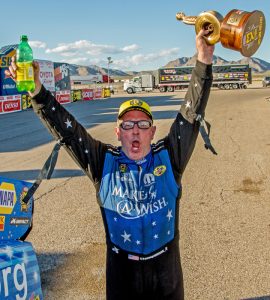 John Collins remains the crew chief of the car and his crew remains intact, which is something that isn’t lost on Johnson Jr. as he focuses on the upcoming season.

“The least amount of change you can have it should help you, and mostly it will help at the beginning of the season and you should start off a lot better than guys who are all trying to get to know each other and work together,” Johnson Jr. said. “It should be a beneficial thing at the start of the season for sure.”

Johnson is especially optimistic considering the way his team concluded 2017.

“We closed it out pretty strong, winning the last race (the Auto Club NHRA Finals, Nov. 12 in Pomona, Calif.),” Johnson Jr. said. “We made the switch to the six-disc clutch at the last race of the year to try and get a head start on ’18 and it gave us a sign of things to come, so I’m excited. I’m hoping we can pick right back up where we left off.”

Johnson said his team ran the six-disc clutch for the first time in a test session Oct. 30 at The Strip at Las Vegas Speedway following the national event in Vegas which ended Oct. 29.

“We made three laps on it (the six-disc clutch) and we decided to leave it in for Pomona and we won the race,” Johnson Jr. said. “It showed a lot of promise in the test session and we thought what the heck we will leave it in and Jack Beckman’s comment was he had never seen anybody hit the six-disc clutch combination so fast. We had some help and the clutch that was in my car was right out of Antron (Brown’s) car (dragster). We made some very small, minute changes to it and ran it.”

The late Terry Chandler was the financial backer of the Make-A-Wish team as well as the Infinite Hero Foundation Dodge driven by Jack Beckman. Chandler died on July 4 after a valiant battle with cancer, and her husband Doug has taken over funding the teams.

“Doug was nice enough to kind of see what Terry would want and he said she would want to do this, so he continued on what she was doing,” Johnson Jr. said. “I think he realizes how many lives she actually touched with my team and Jack’s team. There is a tremendous amount of people who were very beneficial from what she was doing.”

After finishing a career-best second in the 2016 point standings, Johnson dropped down to sixth at the end of last season. His 2017 year was still solid as he had two wins – the season ender at Pomona and the spring race at Las Vegas and he also had four runner-up efforts. 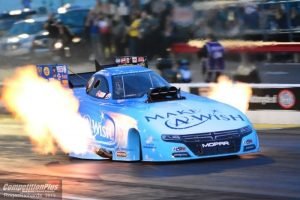 He was plagued by a sub-par performance in the six-race Countdown to the Championship before the last race at Pomona as he suffered two first-round losses at St. Louis and Dallas and didn’t get past the second round at Charlotte, N.C., Reading, Pa., and Las Vegas.

“You have to play the game right,” Johnson Jr. said. “We finished sixth, but that isn’t a number that was indicative of our season because we actually had a pretty decent season. It wasn’t as good as the year before, but it wasn’t bad. The problem is we stumbled when it counted and that was clutch-related, and we’ve learned from that. We had the right theory and the right momentum going and then we ran out of a clutch disc and the five-disc bit us and we had to switch to a six.

I think strategy-wise you need to kind of iron your tune-up out by Brainerd (Minn.) time (mid-August) and be ready to go for the Countdown and we thought we were until we ran out of certain disc. The five-disc (clutch) became so finicky, it liked what we had as far as the clutch-disc package and we were able to continue to perform with the five disc. Soon as we ran out of that disc and had to insert a different disc into the program it didn’t work, and it was unforgiving and caused us all kinds of problems. The six disc allows you to not be so reliant on the disc and gives you a little bit more breathing room and I think that’s going to help our team a whole lot. The team is capable, we’ve shown that and we’re plenty capable of winning the championship. It’s just a matter of putting it all together in one season.”