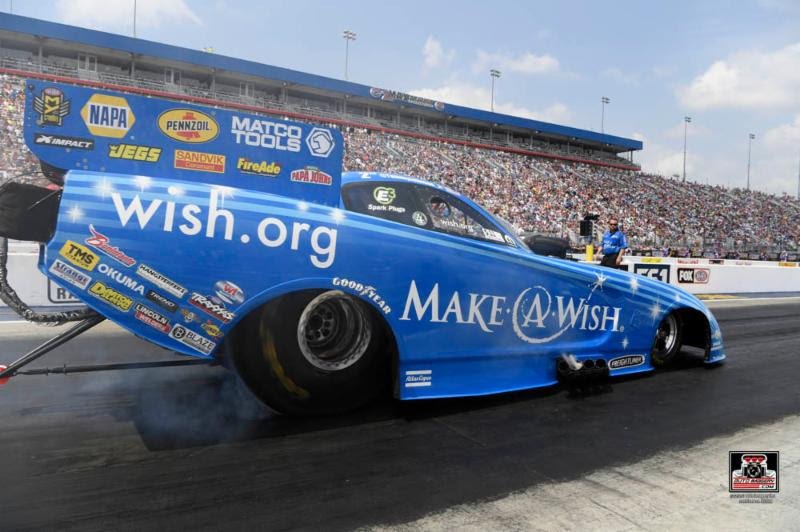 CONCORD, N.C. (April 30, 2017) – Unfortunately for the second weekend in a row, the Sunday ended too early for Terry’s Chandler’s Make-A-Wish Funny Car team.

Driver Tommy Johnson Jr. lost in the opening round last week at Houston and in the first round Sunday in the unique eighth annual NHRA Four-Wide Nationals near Charlotte Motor Speedway.

“It’s definitely frustrating,” Johnson said. “The last thing we expected was to go out there and shake in the first round.

“We felt pretty confident coming into race day. We had a really consistent car, so that was the last thing on our mind that was going to happen.”

Johnson and the Make-A-Wish 2017 Dodge Charger R/T team, led by crew chief John Collins and assistant Rip Reynolds, entered race day as the No. 7 qualifier a time of 3.922 seconds at 319.52 mph.

The Four-Wide Nationals is the only race on the NHRA tour where up four nitro cars are line up for competition with the top two in each quad advancing. On Sunday, Johnson lined up in a quad consisting of Don Schumacher Racing teammate Jack Beckman in the Infinite Hero Foundation car, also sponsored by Terry Chandler, Robert Hight of John Force Racing and Jim Campbell of Jim Dunn Racing.

Johnson left the starting line first of the four with his reaction time of .053 seconds but his car went into tire shake and slowed to a 4.288-second lap at 314.31 mph while Hight and Beckman advanced to round two.

“We pedaled the throttle and tried to catch them. We just need figure out what’s wrong with the car. We’re going to test (Monday) so we can be ready for Atlanta next week.”