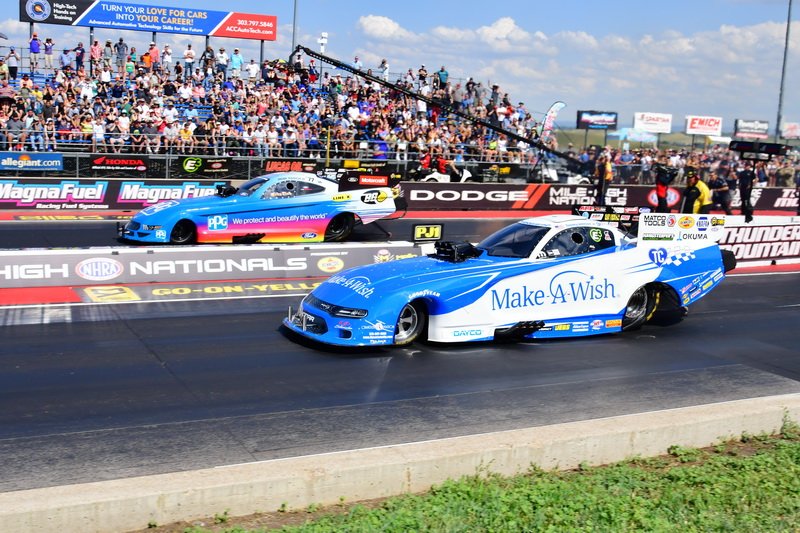 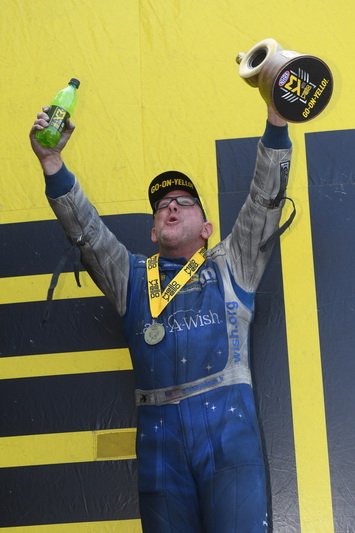 The wait is over for Tommy Johnson Jr.

After being a bridesmaid at the Mile High Nationals in four different categories – Super Gas, Top Alcohol Funny Car, Top Fuel and nitro Funny Car – Johnson is finally a champion at Bandimere Speedway.

That became a reality for the former NHRA Division 5 racer when he edged Bob Tasca III in the final round.

“I’ve wanted to win this race so bad for so long,” Johnson Jr. said. “This race has meant so much to me. What a great day. I’m just happy for my team. This has been the best season ever and I think we are just getting started.”

Johnson Jr., who is the driver of the Make-A-Wish Foundation Dodge Charger SRT Hellcat for Don Schumacher Racing, now has 19 career national event wins – 17 in Funny Car and two in Top Fuel.

This was Johnson’s second win of the season as he also won in Chicago (June 2).

“We struggled on Friday, like a lot of people, but we felt pretty confident Saturday and (in Q4) we made a great run (3.978 seconds). That was my quickest ever on the mountain,” Johnson Jr. said. “That gave us a ton of confidence. We are such a better team than we were in the past and it is good to see us grow as a team. It wasn’t easy (Sunday), Tasca was right there in the final round and we got a few breaks here and there and we finally got it done here.”

Johnson Jr. has 24 round wins this season with crew chief John Collins, and he moved into second place in the point standings behind Robert Hight. Johnson Jr.’s career-best finish in the points came in 2016 when he was second.

“The Bandimeres are such a great family,” Johnson Jr. said. “I started coming up here when I was a kid. My dad raced up here, I’m a Division 5 guy. I ran the divisional race here a lot and I just got to know the Bandimeres really well and they are a great family, so this win means a lot.”

On Sunday, Johnson’s victory parade consisted of wins over Jeff Diehl, Jack Beckman, Cruz Pedregon and Tasca. Johnson Jr. improved his career record against Tasca to 8-0 and this was the first time they met in the final round.

Tasca had the starting line advantage in the final, but Johnson Jr. caught and passed him at the eighth-mile and never looked back.

“It is tough up here on the mountain because you don’t have the downforce because the air is just not as thick,” Johnson Jr. said. “You have to really drive the car up here. I kept giving them feedback on issues I was having driving and it just keep getting better and better all weekend. I told them after second round, I had to do some driving, but the good thing is I can drive it now. It was a good team effort.”

While smiling during his victory press conference, Johnson Jr. took a trip down memory lane talking about how he lost in the 1984 Super Gas finals to Shawn Langdon’s dad, Chad.

“It has been a long time and Shawn (Langdon) showed me a picture this weekend of his dad holding him in the winner’s circle here (at Bandimere Speedway),” Johnson Jr. said. “He was only 2 years old at the time and I remember telling him I’ve been doing this so long I was a runner-up to your dad. It is neat to finally get it done here.”

LINK TO COMPETITION PLUS ARTICLE