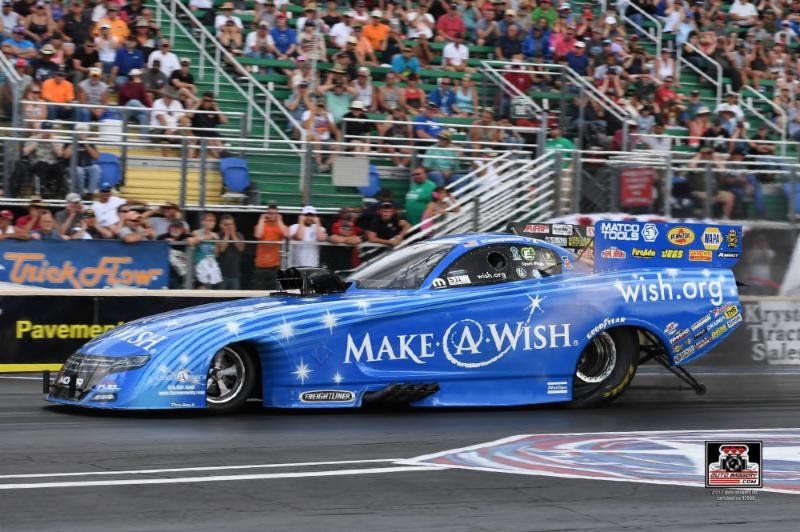 Johnson advanced to the semifinals where he faced his Don Schumacher Racing Jack Beckman and the Infinite Hero Foundation Dodge, also funded by Terry Chandler but Beckman was able to win and move on to win the title.

“It caught me by surprise,” Johnson said of smoking the tires for the first time since Friday night during qualifying. “It was a good day, the car was on, running great, had low E.T. second round and just thought we were really on track and just out of nowhere smoked the tires.”

On Sunday, Johnson entered race day qualified No. 5 with his time of 3.925 seconds at 329.34 mph. He faced J.R. Todd of Kalitta Motorsports for round one.

Johnson met Beckman for the second week in a row in the semifinals.

“We’ll have to look and find what changed. We didn’t really change anything on the car for it to smoke the tires, so something happened and we’ll keep searching,” Johnson said.

“I’m really happy with the way the car’s running, especially on race day. The guys are doing a great job of racing and that’s what we’ve done over the last few years to get where we were at the end of the season. So, they’re doing a great job with that and we’ll continue to progress.”

Norwalk is the final race of a four-race swing throughout the month of June. After a month of racing, the NHRA circuit will have a weekend off before traveling to Chicago for the Route 66 Nationals.