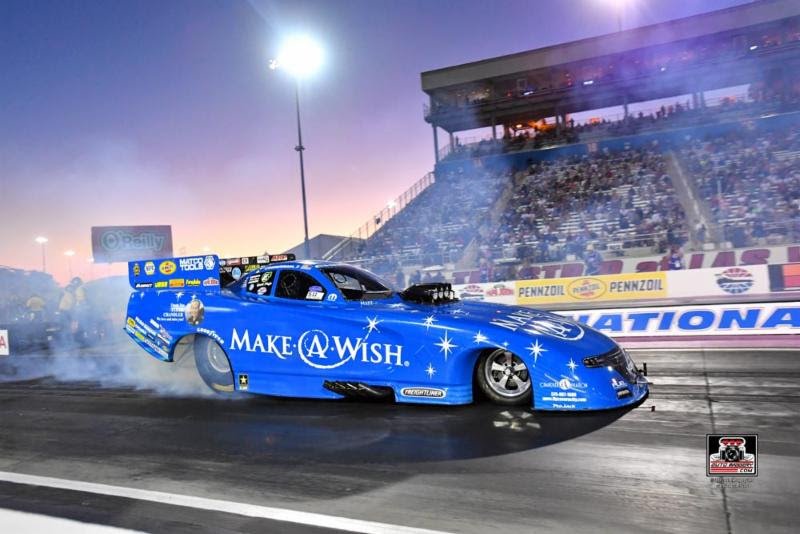 BROWNSBURG, Ind. (Nov. 8, 2017) – As the 2017 season closes, Terry and Doug Chandler’s Make-A-Wish Funny Car team have begun preparing for the next season.

“We stayed to test after the Las Vegas race and worked with a six-disc clutch set-up that showed a ton of potential,” said Don Schumacher Racing Funny Car pilot Tommy Johnson Jr.

Johnson and the team led by crew chief John Collins and assistant Rip Reynolds are ready for this weekend’s season-finale at Pomona, Calif., knowing they have been mathematically eliminated from championship contention heading to the last of 24 NHRA Mello Yello Drag Racing Series events.

“The Countdown (to the Championship) hasn’t been what we were expecting or what we were hoping,” Johnson said of being ranked seventh with one event title. “But I’m very enthused about what we learned during testing. We’re going to stick to the six-disc going into the last race of the year and try to get a head start on next year.”

Team Make-A-Wish has not had the playoff showing they have become accustomed to after finishing third in 2014 and 2015 then second last year.

Johnson and the Make-A-Wish team now set their sights on defending their title won a year ago in the NHRA Finals.

“It’s always great to finish as the winner of the last race of the year. You get two and a half months to relish in it so it would be a big boost for our team to go out and win this last one.”

When Johnson and the Make-A-Wish team won in Pomona a year ago, the late Terry Chandler celebrated with them.

“The last winner’s circle she was in was with us in Pomona a year ago,” Johnson said. “We took goofy pictures and had a lot fun. It’s one of the things I miss the most about her is the good times we had like that. If we win, she’ll be in the winner’s circle with us.”