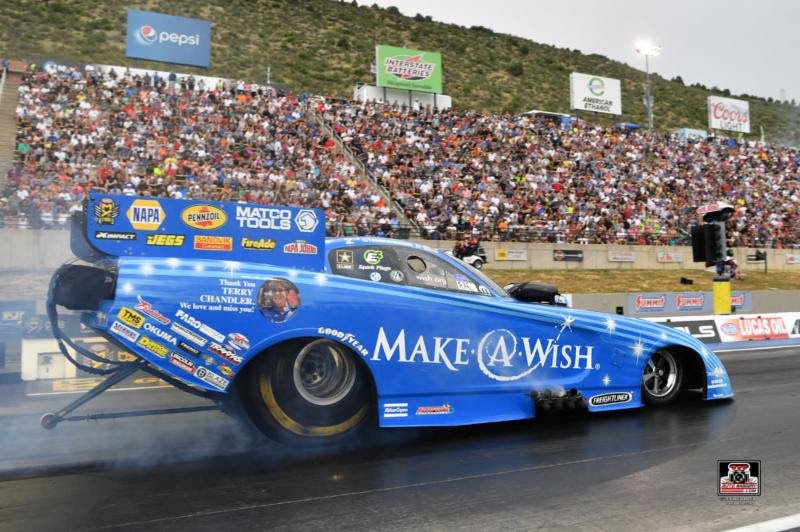 Unfortunately for Johnson, he was beat to the finish line by Robert Hight of John Force Racing at Bandimere Speedway in the 38th annual Mopar Mile-High Nationals.

“I really like the way the car has been performing, especially on race day and going rounds,” Johnson said.

The Make-A-Wish car entered race day qualified No. 12 as they had some issues in adjusting to the thin, Colorado air.

The Make-A-Wish Dodge, tuned by crew chief John Collins and assistant Rip Reynolds, made four clean passes down the track on race day. Their most impressive run of the came during the semifinals when Johnson’s 3.988-second pass at 306.19 mph was best of the round.

“You know you have to peak at the right time with the Countdown (to the Championship) coming. This always seems to be when we turn the corner and start making a move. We want to get some wins but I’m not unhappy with the way we’ve been going a lot of rounds lately.”

The Countdown to the Championship, NHRA’s version of the playoffs, begins after the U.S. Nationals near Indianapolis during Labor Day, a mere four events away.

“You always want a better qualifying position but I had a lot of confidence in the guys that they would get it figured out, even though last night’s last round in qualifying wasn’t as good as we wanted.

Sunday marked Johnson’s fourth career final round at Bandimere. His first came when he was 16 years old racing in Super Gas.

“We learned a lot from it and got a lot of good information and knew we that could use today. It showed. The car ran great all day. We really don’t know what happened. It wore a lot of clutch in the final and put a hole out about the middle of the track. We’ll look at that data and hopefully we can apply that here next year. Right now, we can’t be disappointed with another final for the second race in a row.”

Next week, the NHRA continues its annual Western Swing at Sonoma Raceway for the 30th annual NHRA Nationals at Sonoma.