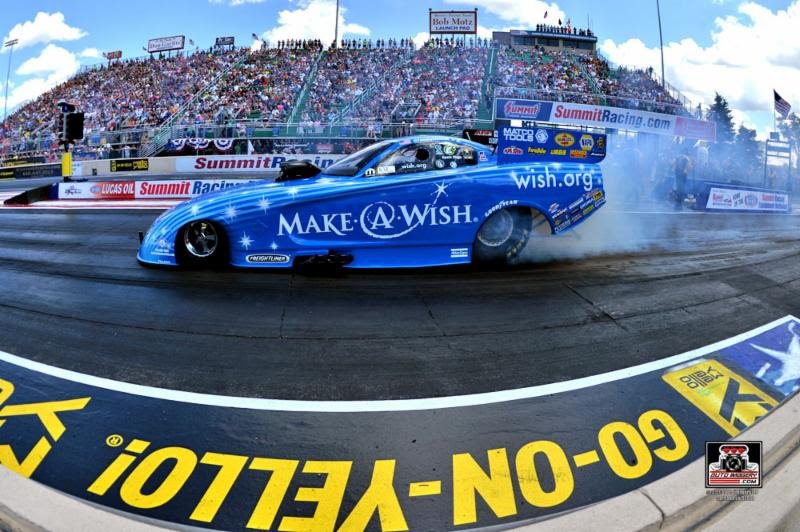 Friday in Norwalk brought rain and delayed qualifying a bit. Temperatures rose on Saturday to match predicted temperatures for Sunday’s championship round.
The Make-A-Wish team, led by crew chief John Collins with assistant crew chief Rip Reynolds, finished qualifying with an effort of 3.925 seconds at 329.34 mph to seed them No. 5.

“We made three solid runs in qualifying and the car was consistent,” Johnson said. “Conditions will be a little different tomorrow but similar to what we saw today.”
During Saturday’s first session, Johnson clocked a time of 4.008 (320.05) for the second-quickest lap of the session. Later he made another solid 3.990 lap (316.38).
Track conditions from the final qualifying session will be similar to what teams will see tomorrow on Sunday.

“We made two good runs today and if we keep that up and continue the momentum we’ve had the last three races, we should be good for tomorrow.”

Johnson will face J.R. Todd of Kalitta Motorsports for the opening round of competition. This is only the second event that the two have met on Sunday as Todd spent the past few years racing in the Top Fuel division. Their previous meetup resulted in Johnson winning over Todd.

The NHRA Nationals in Norwalk, Ohio will close out the “June Swing,” a four-race series throughout the month.

“Not having won a race (at Norwalk) in the past, it would be nice to get a win (here) just because it’s such a nice event and great track.”