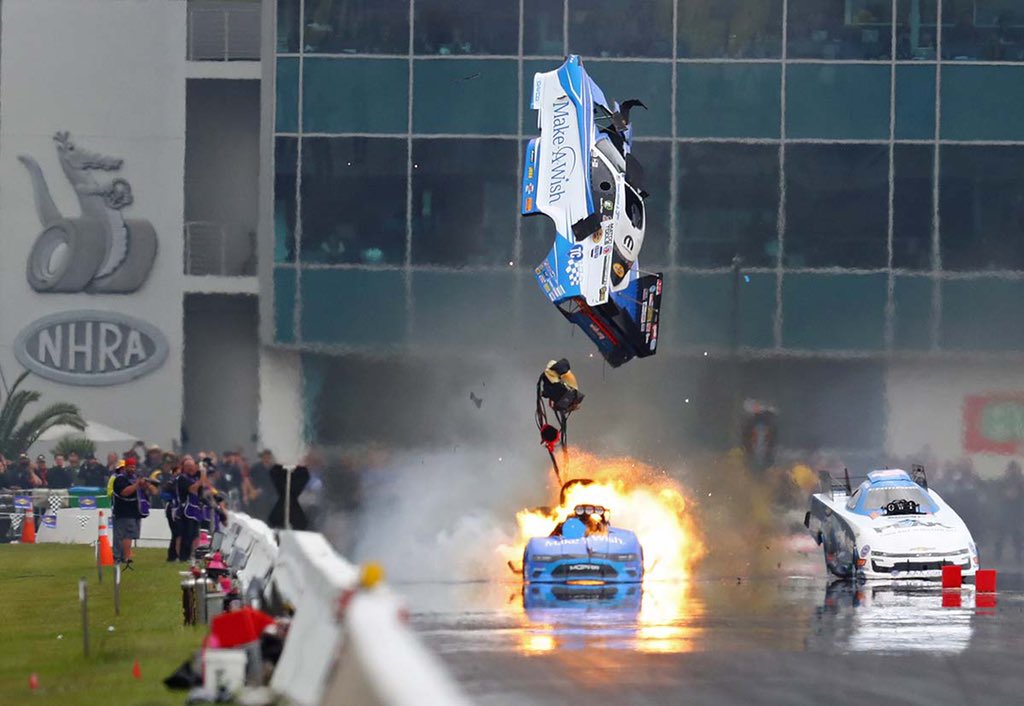 And in about two seconds Saturday evening, their efforts blew up in a fiery spectacle that didn’t hurt anything but their feelings and team owner Don Schumacher’s pocketbook.

Johnson experienced two serious body-destroying engine explosions in his Make-A-Wish Dodge Charger at the Magic Dry Arizona Nationals near Phoenix. But Friday he took the early No. 8 qualifying position and improved to fifth overnight. Then in Saturday’s third overall session, Johnson zipped to the top of the order, trumping tentative No. 2 John Force’s elapsed time by one-thousandth of a second. While Force was wanting to set himself up for a strong shot at earning his NHRA record-extending 150th victory, Johnson was looking for some safe consistency.

His hard-working crew had scrambled to build him a new ride – after they drove 1,700 miles back to the Brownsburg, Ind., shop and before they had to drive it 863 miles down here to Gainesville, Fla.

“The guys had lot of work to do the last two weeks between races. Luckily, we had that amount of time. The guys worked hard every day,” Johnson said.

That was just practice for them. They’ll had to do it again – this time overnight.

They worked late into the night Saturday because Johnson’s engine blew up in the final Funny Car qualifying session, tossing the body over the guard wall onto a grassy strip in front of the return road and grandstands.

“We had some small chassis work to do. We were fortunate the frame wasn’t bent, so it was a small fix,” he said of the post-Phoenix task. “We had to get another Hellcat body mounted. We’re actually down to our last two bodies. Fortunately, there was another one that had just been mounted or we would have been in trouble.”

“The guys did a lot of work. We had to rebuild everything. It was not only the body, but we had to go over all the parts. We hurt two blowers [and] two manifolds. It starts adding up quickly, and then you have all the little pieces that you don’t see, like the cable and all the smaller pieces, that got burnt,” Johnson said. “They did a great job to put it all back together, and we come out here Saturday afternoon and go low in the third session. It shows that their hard work paid off and the level of job that they are doing to continue the performance that we’ve been on. I’m really happy for them.”

He spoke too soon. But Johnson has seen his team perform miracles before. Tommy Johnson earned his only Englishtown, N.J., victory and his first ever at any racetrack from the No. 1 qualifying position in June 2007. Along the way to that triumph, the one he calls “still my all-time win,” his car caught fire in a Round 1 victory and appeared too charred to continue. But his crew had the car ready for him in about an hour’s turnaround time.

“I couldn’t believe that happened. It’s just not supposed to happen,” Johnson said.

LINK TO ORIGINAL COMPETITION PLUS ARTICLE