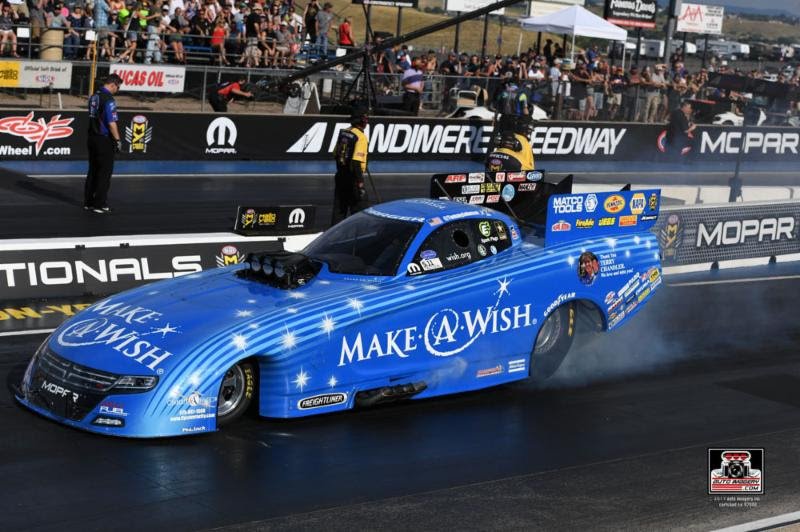 “We’ve been happy with the way the car has been performing the last few races,” Johnson said. “The last six races have been a pretty good stretch for us. But more than anything, we’d like get a win. Going rounds is great, but winning is awfully nice.”

The Make-A-Wish team Powered by Pennzoil and led by crew chief John Collins and assistant Rip Reynolds advanced to the final round of competition at Chicago but came up short two weeks ago to their Don Schumacher Racing teammate and NHRA points leader Ron Capps.

Last weekend in Denver at the first race of the annual three-week Western Swing, Johnson advanced to the final round but was bested by Robert Hight of John Force Racing.

Sonoma marks the second race of the Western Swing. It is the goal of every NHRA team to “sweep” the Swing and win all three events including the last one near Seattle. Johnson and the Make-A-Wish team have a history of “breaking brooms” and stopped another driver from completing the three-race sweep the past two years at Seattle.

“If we can’t sweep, we don’t want anybody else to do it,” Johnson said. “Maybe we can do a semi-sweep and be in all the finals of the Swing. I’d definitely enjoy breaking a sweep again this year. I think we’re up for the challenge of doing that again this year.

“We were runner-up in Sonoma in 2015 so we know we have a car that is capable of getting it done. We just have to put four good runs together on Sunday instead of three.”