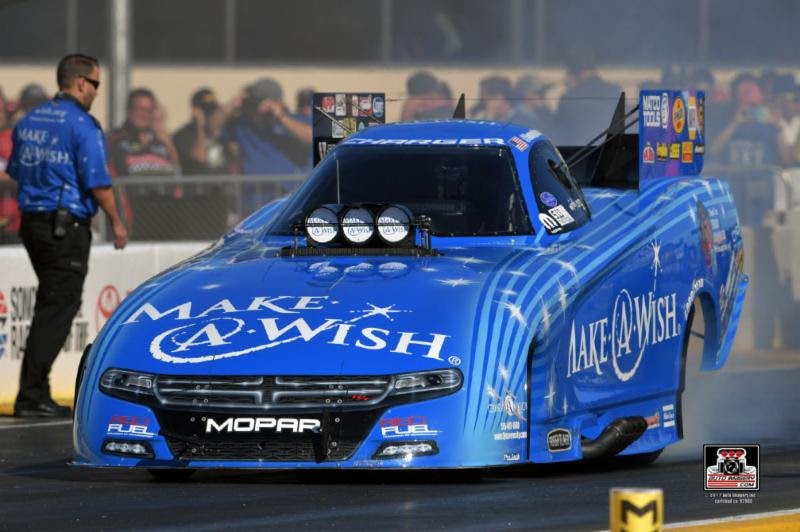 SEATTLE (August 6, 2017) – Terry Chandler’s Make-A-Wish Dodge, driven by veteran driver Tommy Johnson Jr., advanced to its fourth final round of the season and second of NHRA’s Western Swing at the Northwest Nationals on Sunday before coming up just short of the title to Robert Hight.

“It’s frustrating to lose a final again, but three of the last four races (we’ve been) runner-up so you can’t complain too much,” said Johnson, who seeks his second win of the season.

“Our goal was to try to get our position the best we can going into the Countdown and we’re doing a good job of that,” he said of getting to within 13 points of fourth place.

The Make-A-Wish team Powered by Pennzoil and led by crew chief John Collins with assistant Rip Reynolds entered race day as the No. 3 qualifier with their time of 3.930 seconds at 324.05 mph.

In the opening round of competition, Johnson raced Jim Campbell of Jim Dunn Racing and got the win with a 3.953 (325.92). He advanced to the second round to face Don Schumacher Racing and NHRA points leader Ron Capps and theNAPA AUTO PARTS team.

The annual three-week NHRA Western Swing finished in Seattle and teams will travel back to DSR’s shop near Indianapolis to prepare for the next event in two weeks in Brainerd, Minn.

The Make-A-Wish team clinched their place in the Countdown to the Championship, NHRA’s version of the playoffs, which kicks off after the U.S. Nationals over Labor Day Weekend.

“Two to go before the Countdown and it seems like it’s that time of year to start picking up momentum and get yourself set for the Countdown. I’m happy with the way we’re doing and we’ll get it done. Final rounds are great, you just like to finish the job when you get there. But six finals in the Countdown would be just fine with me, too.”