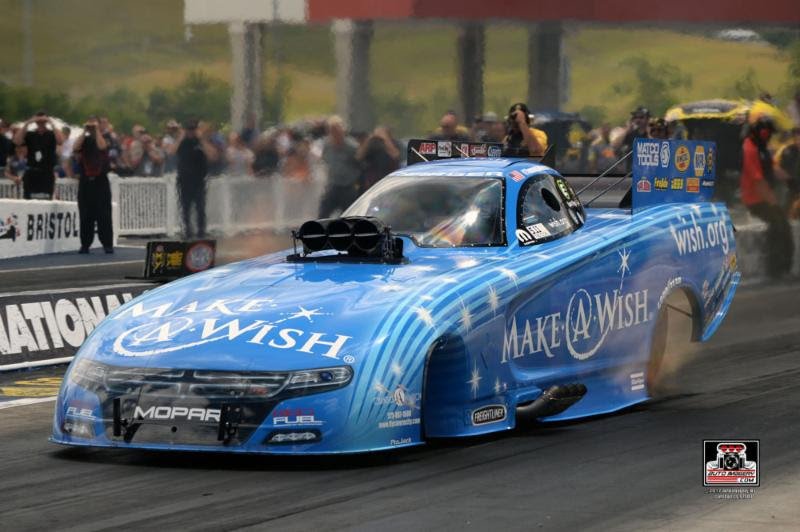 BRISTOL, Tenn. (June 18, 2017) – Tommy Johnson Jr. wanted nothing more than to win the 17th annual Thunder Valley Nationals on Father’s Day weekend with his day Tommy Johnson Sr., who also celebrated his 72nd birthday over the weekend, in the stands but Terry Chandler’s Make-A-Wish Dodge Charger R/T Funny Car came up a tick short in the semifinals.

Before the semifinals, a summer rain shower fell at Bristol Dragway resulting in a delay. Prior to the rain, the track was hot and sticky and the Make-A-Wish Dodge made two of the better laps in the opening rounds on a race track that saw temperatures exceed 140 degrees.

In the opening round, Johnson ran a 4.105-second lap at 314.17 mph over rookie Jonnie Lindberg’s 5.901 before bettering the No. 1 qualifier, Tim Wilkerson, in round two to advance to the semifinals for the fifth time this season.

“The rain delay is probably what cost us the race,” Johnson, who has twice won at Thunder Valley said. “We were the car to beat coming into the semifinal round the way we were running in the heat.”

Squaring off against teammate Jack Beckman, whose team also is funded by Terry Chandler, the winner from one week ago in New Jersey scored the semifinal win light in the Infinite Hero Dodge 4.009 to Johnson’s 4.043.

“This Make-A-Wish team does such a great job when the conditions are really bad like they were today,” Johnson added. “That delay gave everyone else an opportunity and they got around us there in a close race. I’m still happy with the weekend. You never want to lose, but very happy with how the team and car performed in the heat and bad conditions and we’ll see more of that coming up.

“We’ve got two semis and a second round in this June Swing and it’s got us going back in the right direction. We were in a slump after winning at (Las) Vegas. Now going into Norwalk this team has a lot of confidence after starting these four races in a hole. We want to go to Ohio and bring the Wally back to Indy.”

Next weekend is the final race of a four-race swing throughout the month of June when the NHRA circuit travels to the 12th event of the 24 race Mello Yello Series season for the 11th annual NHRA Nationals in Norwalk, Ohio.