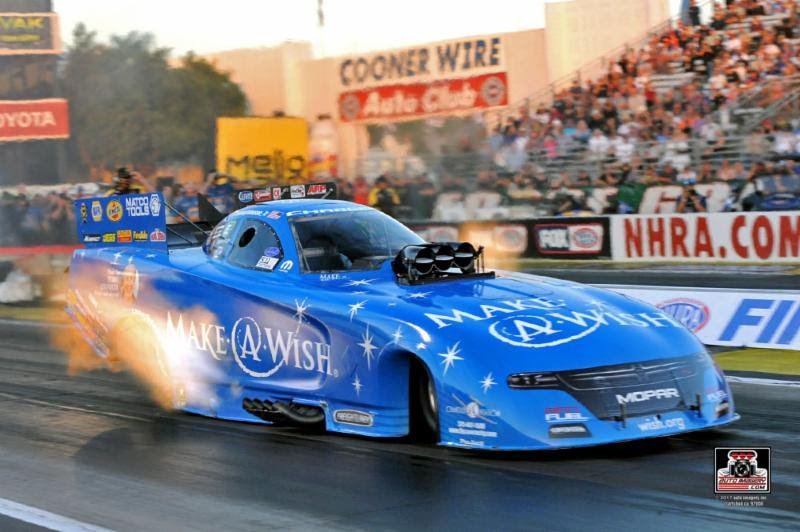 POMONA, Calif. (Nov. 12, 2017) – Tommy Johnson Jr. with Terry and Doug Chandler’s Make-A-Wish team couldn’t have picked a better time to defend the title they won a year ago in the NHRA Finals at Pomona, Calif.

“Our entire team has had a lot of family deaths this year, three guys on my team lost a family member and it’s just been a rough year for us but we kept fighting,” Johnson said.

“We wanted to win this for Terry and that’s why I said, ‘This win is for Terry!'”

The team’s only other Wally Trophy was won at Las Vegas in April but their mentor and friend, the late Terry Chandler, wasn’t able to attend that race. The following week, she was diagnosed with brain cancer and lost her valiant battle on July 4.

The last time she joined her team in a winner’s circle was a year ago at Pomona, and Sunday was the team’s first win since her passing.

“We’ve tried several times to win another one for her, and I knew this was our last time this year,” said Johnson, who raced in the final round of the season three straight years.

“She was a great lady, and we miss her.”

Johnson defeated Robert Hight in the final round after Hight won the world championship earlier in the day.

Johnson and the Make-A-Wish team might not have been able to finish the season had her husband, Doug, not decided to continue funding the team to finish this season and committed to funding both the Make-A-Wish and Infinite Hero teams for at least three years.

The Make-A-Wish team will finish the season in sixth place after being the championship runner-up last year and third the two previous years.