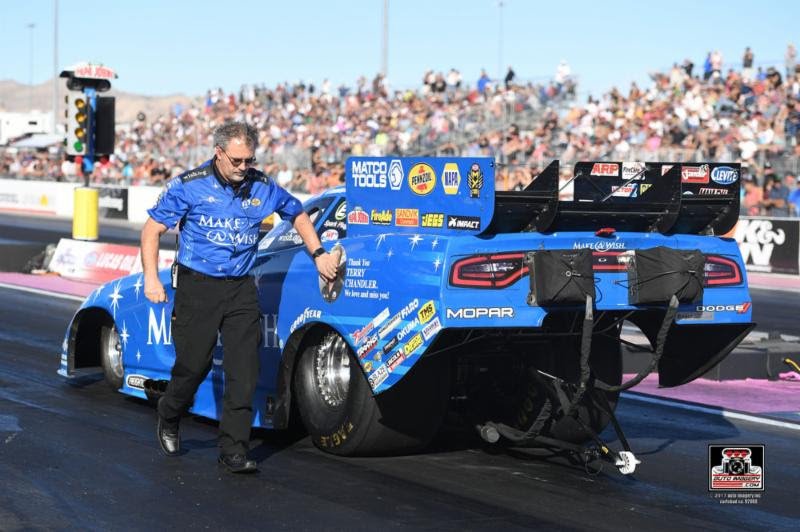 LAS VEGAS (Oct. 29, 2017) – After their second round loss on Sunday at The Strip at Las Vegas Motor Speedway, Terry and Doug Chandler’s Make-A-Wish Funny Car team with Tommy Johnson Jr. look toward closing the season with a win and getting ready for the 2018 NHRA Mello Yello Series season.

When Johnson lost to Don Schumacher Racing teammate Jack Beckman that mathematically eliminated him from contending for the championship in two weeks at the season-finale at Pomona, Calif.

Johnson and the team were championship runners-up last year and finished third the two previous seasons.

The late Terry Chandler was the financial backer of the Make-A-Wish team as well as the Infinite Hero Foundation Dodge driven by Beckman. Chandler died on July 4 after a valiant battle with cancer, and her husband Doug has taken over funding the teams.

“It’s been a tough year for our team,” Johnson said. “We’ve had a lot of issues with losing Terry (Chandler) and three crew members losing family members. It’s just been a rough year, but we keep fighting.”

“We made a little improvement this weekend, just a tough weekend. We got a round win but that’s not what we’re used to.”

“We’ll test here tomorrow and try some new things for next season and see if we can’t start working toward that.”