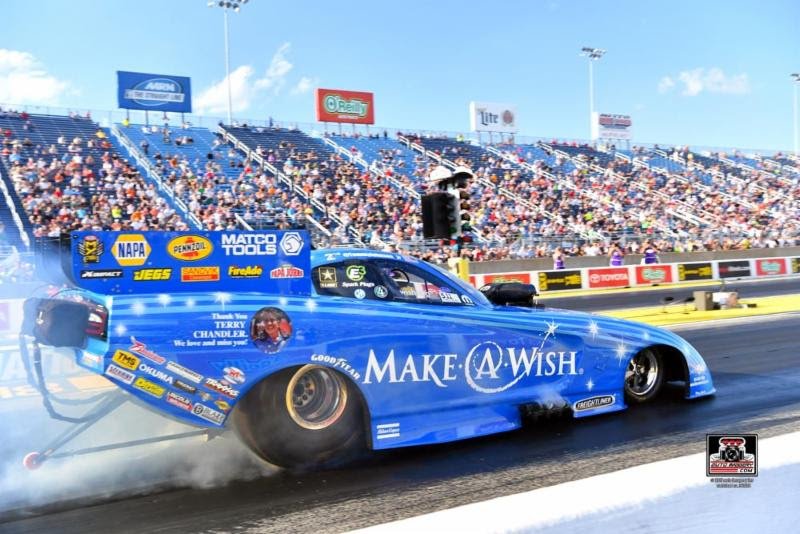 BROWNSBURG, Ind. (July 19, 2017) – After a weekend off from racing, the NHRA Mello Yello Drag Racing Series kicks off the annual three-week Western Swing with the 38th annual Mopar Mile-High Nationals, and Tommy Johnson Jr. is ready to race Terry Chandler’s Dodge Charger R/T Funny Car on the mountainside of Bandimere Speedway near Denver.

“Denver can be a struggle,” Johnson said of the track’s mile-high altitude. “There are so many changes that have to be made to the car for this once-a-year event. I love the challenge of it.”

Unlike other tracks on the NHRA circuit, not are higher in the thinner air than Bandimere Speedway that sits at 5,860 feet.

“It’s just a beautiful facility and I’ve always enjoyed racing there. I’ve raced there for many, many years. The Bandimere family is a great family and they always put on such a great event. I go into the Denver race with a positive attitude. A lot of people dread going to Denver but I look forward to it. It’s one of the races that’s very unique and offers a different opportunity for success there.”

The 2017 season has been very successful for Don Schumacher Racing, especially its Funny Car program.

DSR’s Dodge Funny Cars have won 12 of 13 this season including Johnson’s win at Las Vegas.

“Being involved with Mopar starting way back in the ’90s with the Top Fuel car, and having such a long history with Mopar, it would mean a tremendous amount to win the Mopar Mile-High Nationals this year,” Johnson said.

“Especially with the way all of our Dodge Chargers have been running this year in Funny Car – winning 12 of 13 events. There’s no reason to stop now and I think the crown at Denver is the royal jewel for Mopar and Dodge to be able to win the Mopar Mile-High Nationals.”

The Mile-High Nationals kicks off 6 p.m. (MT) Thursday with the annual Mopar Block Party at Golden, Colo., when downtown is closed for a free car show, Mopar and other displays, food vendors, live music and autograph session from 6:45-7:45 featuring Johnson and DSR’s other Mopar drivers.