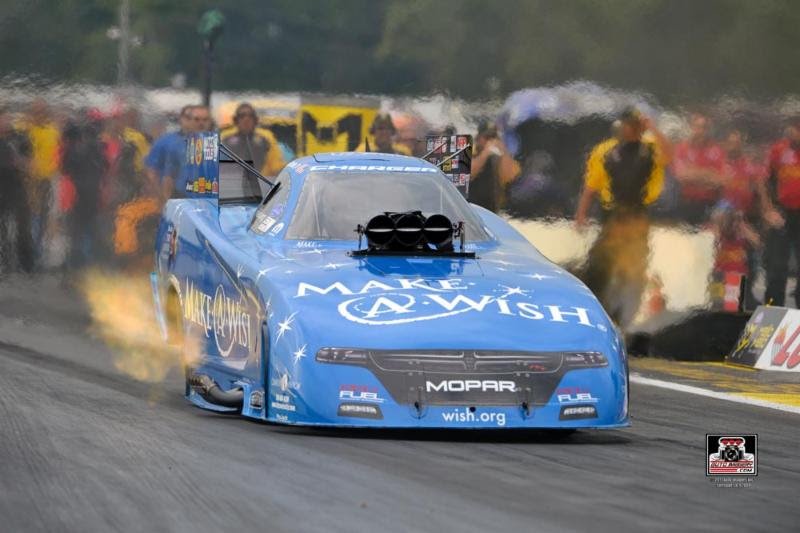 No Funny Car has been more consistent than Johnson over the past five events when his team led by crew chief John Collins and assistant Rip Reynolds have advanced to four championship rounds and moved up one spot to fourth in the standings heading to Friday night’s qualifying session to begin the finale of the 18-race regular season.

The only missing during that hot streak was winning a second Mello Yello title of the year.

“We’ve done a really good job the last several weeks to put ourselves in a much better position heading into the Countdown to the Championship,” the veteran driver who advanced to the final round of the U.S. Nationals in 2002 said of the pending six-race Countdown playoff when the top-10 drivers after Indy will vie for the world championships.

“We’ve have a consistent Dodge that will be tough at Indy.”

The U.S. Nationals offers a unique points system in the regular season where a driver can earn up to 191 points compared to the customary 130; each round win during Monday’s championship eliminations will be worth 30 points instead of the normal 20.

Johnson is ranked fourth in points, trailing Don Schumacher Racing teammates Ron Capps (in first) and Matt Hagan (third) and ahead of another teammate, Jack Beckman (fifth). While he cannot overtake Capps, he can move up to second but also could be passed by Beckman.

Points for the Countdown, which begins two weeks after Indy near Charlotte, are reset with the regular season points leader starting with a 20-point lead over No. 2. and others in the top-10 separated by t apart by 10-point intervals.

Johnson, who estimates he’s competed in nearly 30 U.S. Nationals with his first in 1984, understands the importance of a high regular season finish. Last year he started the Countdown ranked seventh and finished second in the championship standings after advancing to four final rounds in the Countdown and winning twice.

“We learned last year you have to start as high as you can for the best shot at winning the championship,” he said. “We’ve done a really good job the last several weeks to put ourselves in a much better position than last year.”

COUNTDOWN TO THE COUNTDOWN: Many drivers consider the U.S. Nationals to be the “first” race of the Mello Yello Series Countdown to the Championship six-race playoff that begins two weeks after Indy near Charlotte.
Although Indy is the last of 18 regular season events, it will finalize the top-10 drivers who qualify to contend for their respective world titles, and points are reset after Indy for the Countdown.
This week offers drivers a chance to earn a maximum of 191 points compared to 130 offered at the previous 17 races. Indy is the only Mello Yello event with five qualifying sessions instead of four.
The quickest driver in each session earns four bonus points, second quick gets three, third quick gets two and fourth quick gets one. Each round win on Monday pays 30 points instead of 20. Each driver making a qualifying attempt earns 15 and added points are issued for the final qualifying order: 10 for first, nine for second, eight for third, seven for fourth, six each for fifth and sixth, five for seventh and eighth, four for ninth through 12th and three for 13th through 16th.
$100,000 TRAXXAS TOP FUEL NITRO SHOOTOUT: All three DSR nitro teams are qualified for the $100,000-to-win Traxxas Top Fuel Nitro Shootout. One spot in each category will be determined by a fan vote and lottery drawing on Wednesday during Fanfest at Monument Circle in downtown Indy.
The top seed for Saturday’s Top Fuel Shootout is DSR’s three-time and reigning world champion ANTRON BROWN, who will race the lottery winner in the first round. Other first-round matchups are: LEAH PRITCHETT vs. Doug Kalitta, TONY SCHUMACHER vs. Brittany Force and Steve Torrence vs. Clay Millican.
The top-seed for Sunday’s Funny Car Shootout is DSR’s reigning world champion RON CAPPS, who will race the lottery winner in the first round. Other first-round matchups are: MATT HAGAN vs. John Force, TOMMY JOHNSON JR. vs. JACK BECKMAN and Robert Hight vs. J.R. Todd.