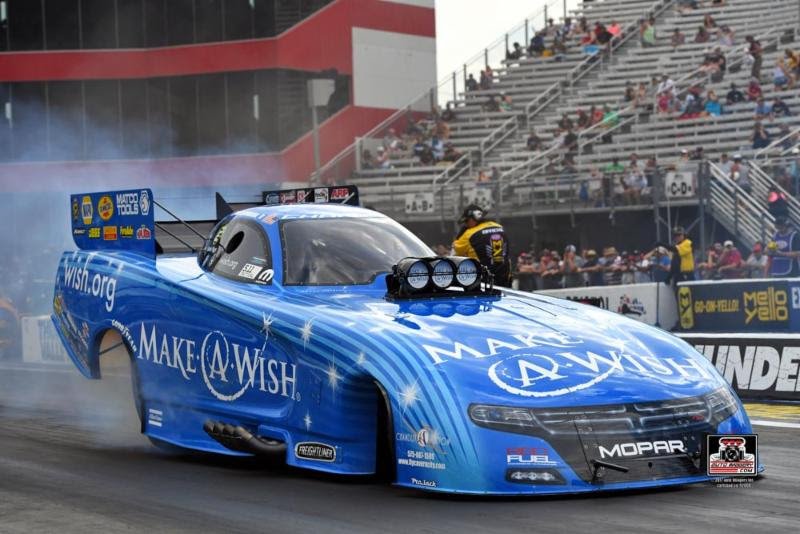 BROWNSBURG, Ind. (June 20, 2017) – The “June Swing,” comes to a close this weekend as the fourth race of a four-race swing ends at the 11th annual NHRA Nationals in Norwalk, Ohio, and Tommy Johnson Jr., driver of Terry Chandler’s Make-A-Wish Dodge Funny Car, is ready to close out the month with a win.

“I think we’ve done well in the previous three races after coming out of that slump,” Johnson said. “We’ve turned our team around and I’m excited for the hotter weather and summer conditions.”

The NHRA Mello Yello Drag Racing series is in the heat of its 2017 season. June consists of four races in four weeks. The Make-A-Wish team has advanced to the quarterfinals or better at each of the three events so far.

As temperatures continue to go up this month, the Make-A-Wish Dodge Charger R/T Funny Car Powered by Pennzoil, has traveled down hot race tracks as many other cars went up in tire smoke.

“It’s seems to be to our team’s liking. Our car seems to run better when it’s hot and we’re heading into the hotter events now.”

The NHRA Nationals in Norwalk is the 12th event of the 2017 NHRA season.

“I do enjoy the track and the fans there,” Johnson said. “The facility is really nice. It’s a race I always look forward to every season.”

Last year in Norwalk, the Make-A-Wish team, led by crew chief John Collins and assistant Rip Reynolds, finished qualifying as the No. 8 seed.
Johnson beat Tim Wilkerson in the first round and Del Worsham in the quarterfinals. He then was defeated by Courtney Force in the semifinals.

The Make-A-Wish team earned the event title in Las Vegas in March but has yet to revisit the winner’s circle. Johnson says he and the team would love to earn their second win of the season at Norwalk.

“Not having won a race there in the past, it would be nice to get a win there just because it’s such a nice event and great track.”