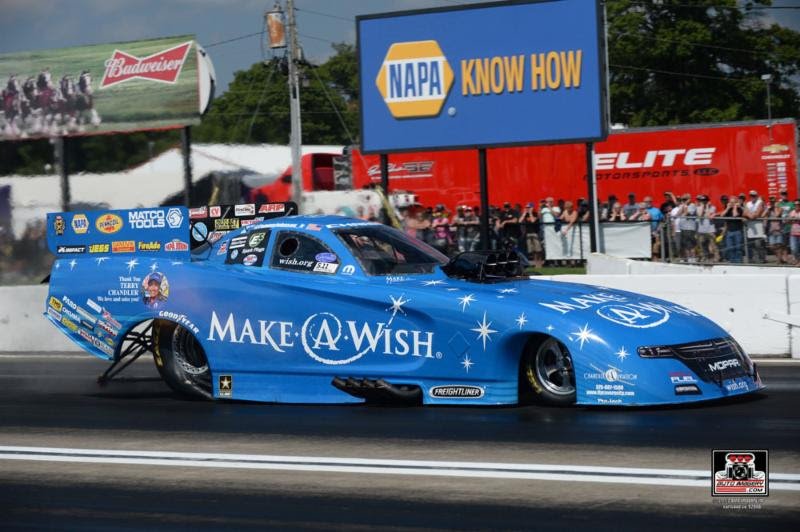 BRAINERD, Minn. (Aug. 20, 2017) – Tommy Johnson Jr. advanced to his fourth final round in the past five events but came up a little short Sunday at Brainerd International Speedway but finished as the runner-up.

“It’s another runner-up, which is frustrating, but at the same time it’s a really good thing,” said Johnson, who moved up one spot to fourth in the championship standings with Terry and Doug Chandler’s Make-A-Wish Dodge Charger R/T Powered by Pennzoil.

“We made a move in the points today, got ourselves in the top four and one of these days if we continue to run like that that runner-up’s going to become a win.

Johnson with his crew chief John Collins and assistant Rip Reynolds entered race day as the No. 5 Funny Car with their time of 3.880 seconds at 330.96 mph in their quest for a second title of the year.

Johnson defeated Jonnie Lindberg in the opening round and Courtney Force in the second.

In the semifinals, he faced Robert Hight of John Force Racing who set the NHRA world time record on Friday night at 3.793 seconds (338.00 mph).

Johnson caught a break when Hight made mistake at the starting line and thought he saw Johnson’s win light come on at the end of the track so Hight didn’t get back on the throttle. But Johnson’s lost traction and peddled the throttle a few times and was able to get the win with a subpar time of 6.875 at 128.60.

In the final round, Johnson lost a close race to Alexis DeJoria whose time of 3.906 edged Johnson’s 3.933.

“We’re saving all those wins I guess for the Countdown (to the Championship). We have a really good team, really consistent car and just can’t get a little bit of luck in the finals. Our team is going to be tough to deal with.”

In two weeks, the NHRA teams will battle it out at the prestigious U.S. Nationals, near Indianapolis. Then points are reset for the NHRA’s Countdown to the Championship playoffs.

“I’d love nothing more than to get that win at Indy or in the Countdown and I think we’ll have a great shot at both.”