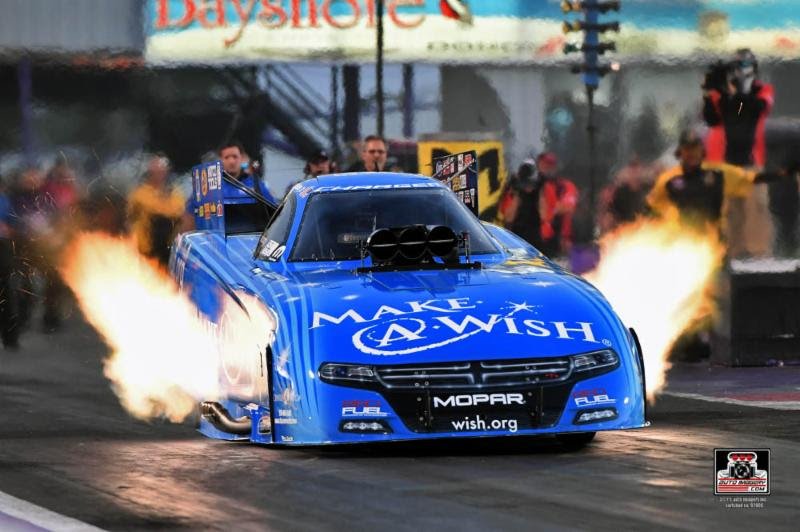 They badly wanted to win the Wally Trophy and delivered to team sponsor Terry Chandler, who is recovering at home after major surgery.

They might have wanted that too badly as the Don Schumacher Racing 2017 Dodge Charger R/T, which won the title two weeks ago, were eliminated in the first round by rookie Jonnie Lindberg, the driver who Johnson beat for the trophy at Las Vegas.

“It’s definitely frustrating to go out first round,” said Johnson, who qualified seventh. “We have such a great team and we know we can do better.
“It was just a tricky racetrack out there first round. There were some good runs but there was also a lot of tire smoke. Unfortunately, this round we were on the wrong side of that.

“Normally, we shine when conditions are like that. We were just a little off all weekend. We were kind of doing catch up all weekend long. The problem was on Sunday, we didn’t have enough good data from qualifying for a winning tune-up on race day.”

The Make-A-Wish team, led by crew chief John Collins and assistant Rip Reynolds, entered race with a best time of 3.934 (320.05 mph) in qualifying.

Next week the NHRA circuit travels to zMAX Dragway near Charlotte Motor Speedway for the unique Four-Wide Nationals where four nitro cars race at a time.

“We’ll regroup, come out swinging at the Four-Wide. Charlotte is kind of a home race for me with all my family lives there now and come out. We’ve done well there in the past there so I’m looking forward to it.”