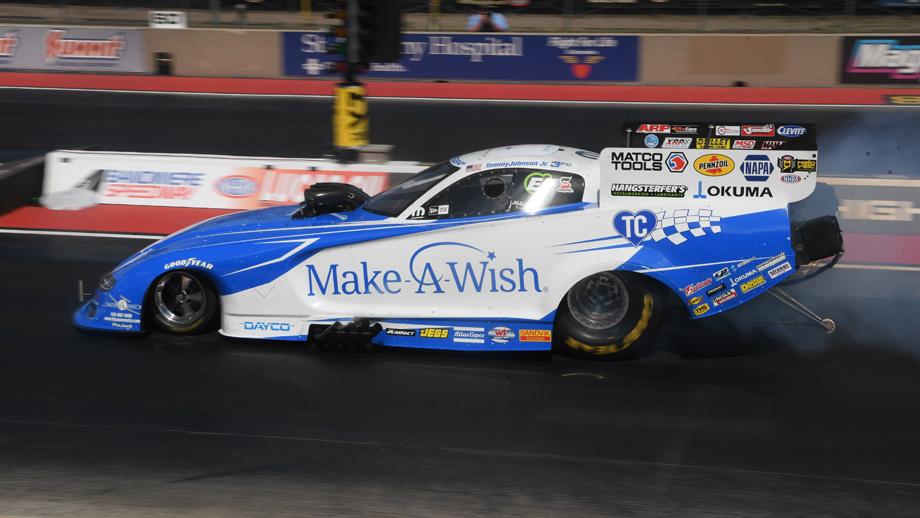 From Super Gas, to Top Alcohol Funny Car, to Top Fuel, and eventually the Funny Car class, Tommy Johnson Jr. has tried to win the Dodge NHRA Mile-High Nationals presented by Pennzoil for more than three decades, and he finally made it happen by beating Bob Tasca III in the final round. Off to what he calls the best start of his career, Johnson now has two wins and a runner-up in the first 14 races of the season. Johnson’s latest win came when he drove to a 4.102 in the final to beat Tasca’s 4.158.

“We just kind of struggled on Friday, but I felt confident on Satuday because got down the track on Q3,” said Johnson, who won from the No. 2 qualifying spot. “I made a great run last night and it gave us a ton of confidence. We are a much a better team this year than we’ve been in past seasons and it’s good to see us grow. We had a good race against [teammate] Jack Beckman, and then Tasca was right there in the final. I’ve wanted to win here for so long because they Bandimere family is so great. I came here for the first time as a kid with my dad and they’ve always treated us well.”

While Johnson is happy to revel in his latest triumph, he also admits that it’s heartwarming and inspirational to share it with young Porter Johnson, a special guest of the Make-A-Wish program that was named as the honorary starter for the event.

“To deliver a victory for Porter and his family is awesome,” said Johnson. “It speaks volumes for what [team sponsor] Doug Chandler is doing. He funds this team and raises awareness. Make-A-Wish is a great foundation and it’s very humbling to be a part of it.”

Johnson’s road to the final included wins over Jeff Diehl, Beckman, and Cruz Pedregon, who always seems to put his best foot forward in Denver. In their semifinal heat, Johnson drove his John Collins-tuned Dodge to a 4.056 to win after Pedregon smoked the tires in his Snap-on Dodge. Johnson, now a 19-time national event winner as a pro, came into the Denver race as the No. 3 seed in Funny Car, and passed John Force to move into second behind runaway leader Robert Hight.

Despite the loss, Tasca has to feel good about the progress of his Motorcraft Ford Mustang this season. After struggling at the start, Tasca has been among the class’ best lately with wins in Bristol and Norwalk and a semifinal finish at his home event in Epping. Tasca’s road to the final went through Jim Campbell, Ron Capps, and low qualifier Hight.