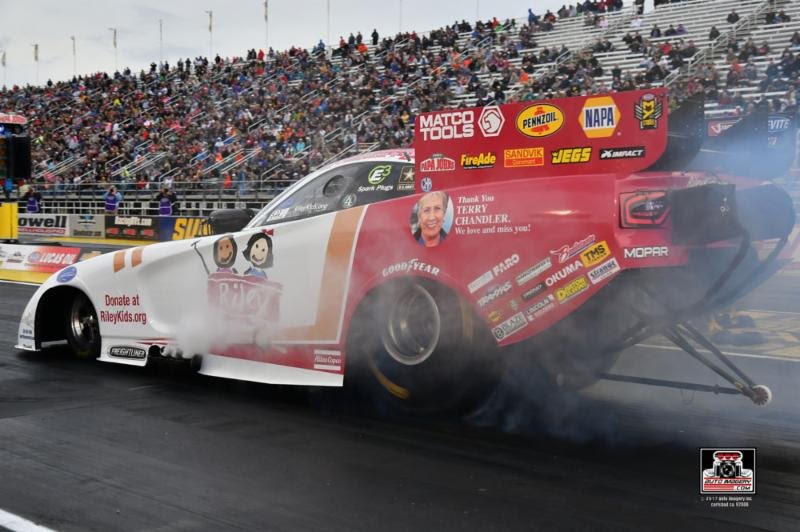 BROWNSBURG, Ind. (Sept. 4, 2017) – It seems to take longer to recover from losing to a teammate and the weekend at the NHRA U.S. Nationals was even tougher for Don Schumacher Racing’s Tommy Johnson Jr. to get past.

The driver of Terry and Doug Chandler’s Riley Hospital for Children Dodge Charger R/T lost to teammate Jack Beckman, whose Funny Car also is funded by the Chandlers, on Sunday in the first round of the Traxxas Nitro Shootout all-star race and he endured the same fate when they met to open eliminations Monday during the 63rd U.S. Nationals eliminations.

While Johnson was doubly disappointment, the veteran driver who has won one Mello Yello Series title this season, knows the main goal of the year still lies ahead.

“Hopefully, it builds a fire under us and we come out swinging at Charlotte,” he said of the six-race Countdown to the Championship playoff that begins in two weeks near where most of his family resides.

Johnson, who finished second in the championship standings a year ago and third the two before that, earned the No. 5 seed with crew chief John Collins and assistant Rip Reynolds for the Countdown. Entering the U.S. Nationals, Johnson trailed points leader and teammate Ron Capps by 203 points but will be 50 points out of first for the Countdown when points are reset.

The Make-A-Wish team was one of the best leading up to Indy after advancing to four of the five previous final rounds.

“Indy was really frustrating, very disappointing,” he said of qualifying 12th and the first-round losses. “We came in here on a real hot streak and tested well. We felt confident in our chances for this weekend.

“We had problems in the first three runs of the qualifying that set us back and put is in a hole. We did our best to climb out of it, but it was just too big of a task to try to get back on base to run well.

“It’s not how you want to go into the Countdown. We’re going to start fifth, which is better than last year (seventh), but this is not what we expected. We’re going to stay and test (on Monday), and get ourselves back to where we need to be to go to Charlotte.

“But this is the biggest drag race of the year, and one of our biggest disappointments of the year.”