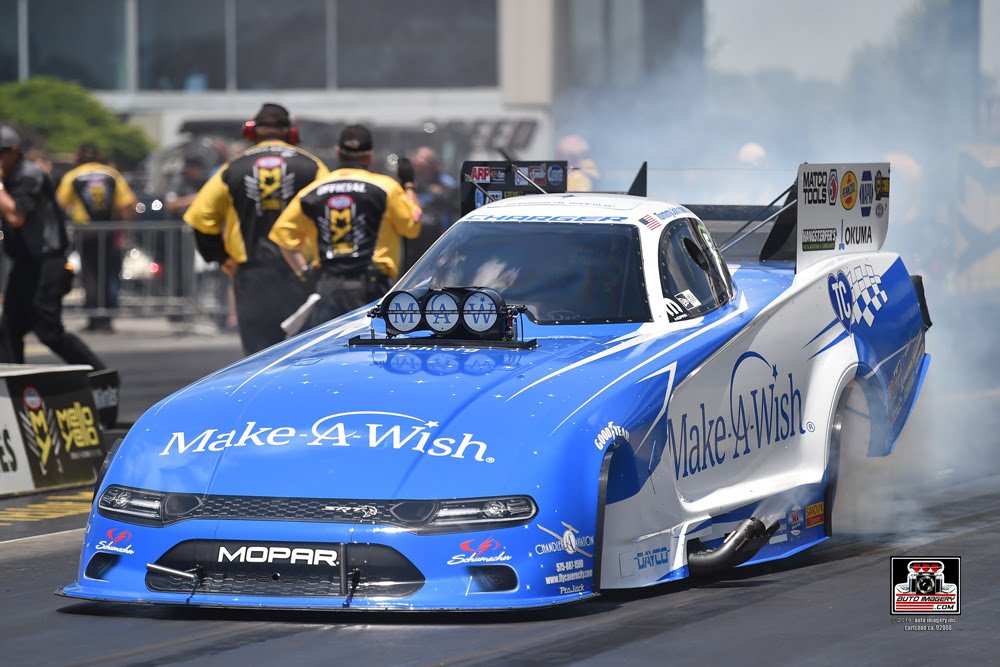 Race Recap:
Arguably the hottest driver in the Funny Car class coming into the weekend was last week’s Chicago winner Tommy Johnson Jr. After reaching the semifinals in Atlanta and Richmond behind the wheel of the Make-A-Wish Dodge Charger SRT Hellcat, Johnson sealed the deal last Sunday in the Route 66 Nationals. He was looking to make it back-to-back wins this Sunday after qualifying fourth, and underscored that statement with his best run of the weekend, a 3.914 E.T., in his round one victory over Terry Haddock.

Against Ron Capps in the quarterfinals, Johnson got the starting line advantage with his .039-second reaction time and took the holeshot victory after making identical 3.941-second runs. In the semifinal, Johnson faced point leader Robert Hight and his chance to defeat Hight in consecutive events ended quickly when he left -0.102 early and turned on the red light before going up in smoke at the starting line. Johnson continues to rank second in the championship standings.

Quotable:
“This was another weekend where we had a really good car. Big picture-wise we made it to another semifinal and leave here sitting second in points. I hate it that I made a mistake there at the starting line. I was just pushing. We knew Robert (Hight) was running well, and we had to push hard. I pushed just a little too much. The bottom line is the Make-A-Wish Dodge SRT Charger Hellcat is a really good car right now and we’ll head to Bristol and hopefully go to another final round.”