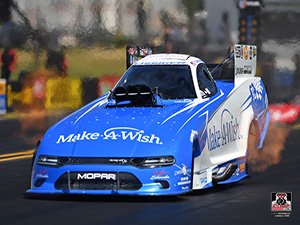 Race Recap:
Tommy Johnson, Jr. continued his success in the hot climate this weekend during the NHRA Virginia Nationals. After a runner-up finish earlier this season in Las Vegas and a semifinal appearance two weeks ago in Atlanta, Johnson and the Make-A-Wish team have proven their Dodge Charger SRT Hellcat Funny Car can handle the heat. He qualified second with his Q2 E.T., his best qualifying position to date in 2019, and took care of business seamlessly in his opening round match-up against Terry Haddock with his pass of 4.027 seconds.

With track temperatures reaching 140 degrees, Johnson and fellow Hellcat Funny Car racer Jack Beckman were on the spot immediately when their machines quickly last traction in round two. Johnson was able to recover almost right away and cruised to a victory over Beckman with his pass of 5.356. The victory set up a second consecutive semifinal contest with Ron Capps. Johnson lost traction early again, but this time he wasn’t able to recover and Capps knocked him out for the second event in a row.

Quotable:
“To say it was a tricky racetrack today would be a huge understatement. We had a nice run there in the first round and then the track got really tricky for everyone. To be able to win the second round on a pedal job was good. I was hoping Capps would smoke his tires too and we could pedalfest it out, but credit to those guys for getting down the track. We know moving forward the race tracks are only going to get hotter, so I’m glad we’ve run well in the heat. I feel like we are really close to having the right tune-up for it.”