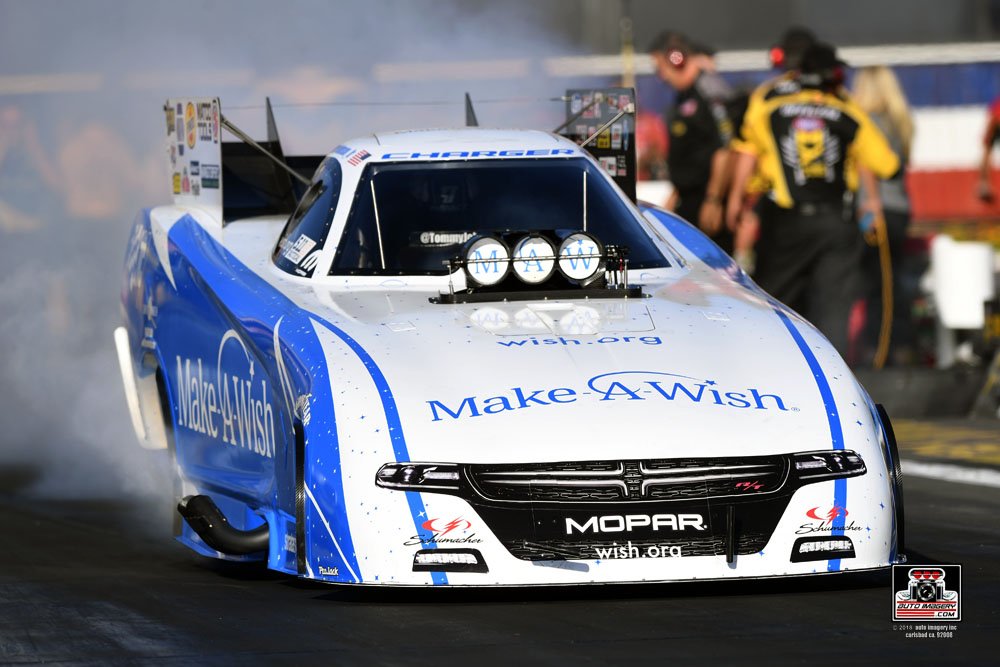 Race Recap:
Coming off three consecutive No. 1 spots, Tommy Johnson Jr. started third after holding the provisional pole and earning 14 bonus points during qualifying. The two-time defending event champion at the season-ending Pomona race posted a 3.905-second E.T. at 327.59-mph in his Make-A-Wish Dodge Charger R/T Funny Car, second quickest of the first round, to beat Cruz Pedregon. Johnson survived a scare in the second round against Courtney Force when his engine initially would not fire up, but once his engine turned over, he lit up the board with a winning 3.913 E.T. that was quickest of the round.

Next up was an all-DSR Mopar Dodge semifinals battle with fellow ‘giving car’ pilot Jack Beckman. Johnson matched his quarterfinals E.T. of 3.913, paired with a speed of 325.06-mph, to outrun his teammate and advance to his fourth straight final round at the Auto Club NHRA Finals, third of the year and 48th of his career. Johnson left nothing on the table against newly-crowned Funny Car champion J.R. Todd, posting his quickest run of race day with a 3.889 at 327.51-mph, but it couldn’t match Todd’s winning 3.872-second pass. With his runner-up finish, Johnson moved to third in the final standings to lead all DSR Funny Car drivers and win the opportunity to drive a Dodge Hellcat for the year.

Quotable:
“It was a great weekend, we just came up a little bit short. I’m proud of my guys; we have such a strong race car. To come out here and finish the season on a competitive note, finish third in points, it’s hard to be ashamed of finishing third so, I’m extremely happy. You always want a better year, unless you’re No. 1, but all in all, not a bad year. I thank Dodge and Mopar for putting the Hellcat on the line for the highest finishing driver. That certainly was in the back of our mind and we’ll put it to good use this year.”