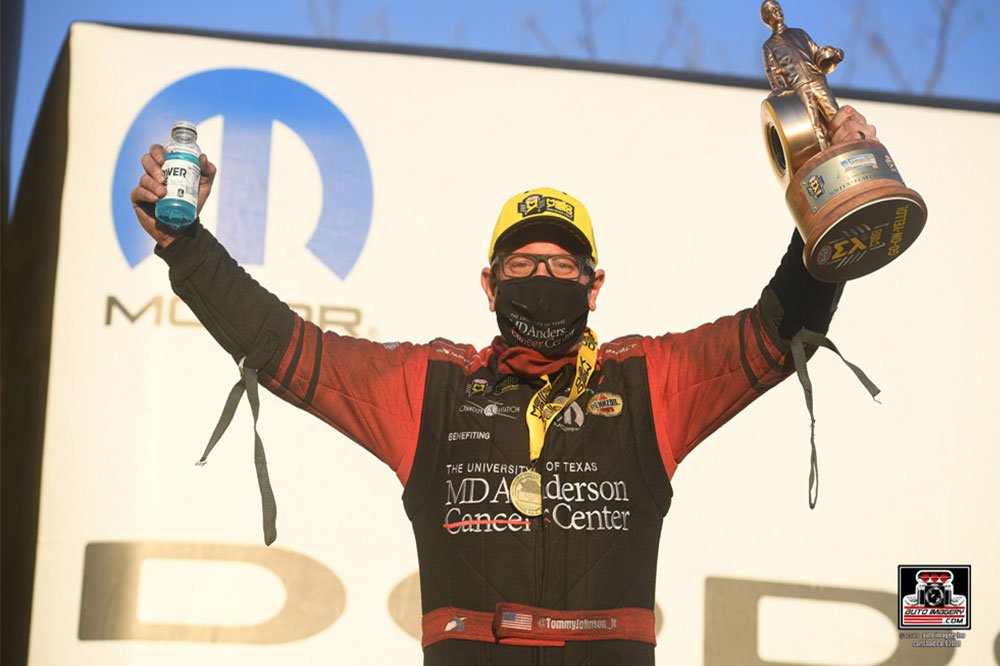 Note:
Cold temperatures prevented Factory Stock Showdown Series competitors from taking to the track on Sunday. NHRA Midwest Nationals Factory Stock competition is set to resume at the upcoming Houston event. It is to-be-announced whether qualifying from the St. Louis event will carry over into the Houston race.

MADISON, Ill. (October 4, 2020) – Behind the wheel of the Doug Chandler-sponsored MD Anderson Dodge Charger SRT Hellcat, Tommy Johnson Jr. delivered the 11th consecutive Funny Car victory for Don Schumacher Racing, making drag racing’s winningest organization the first in NHRA history to go 11-in-a-row in a single category. Johnson’s NHRA Midwest Nationals triumph was his second of the season, 21st in his career, and first at World Wide Technology Raceway. For Johnson, who was battling it out to stay relevant in the all-DSR championship chase, the win cements him as a viable threat to capture that elusive first Funny Car world title.

After qualifying eighth, Johnson zoomed past Terry Haddock in the opening round of eliminations to face Paul Lee in the quarterfinals where it was Johnson’s right foot that sealed the victory with Johnson taking the win in 3.943 seconds versus Lee’s 3.892. The semifinals featured a showdown between Johnson and Jack Beckman, placing Doug Chandler’s ‘giving cars’ directly in the spotlight to square off for a berth to the final round. Beckman gave it a solid effort, but his was no match for Johnson’s session-best run of 3.896-seconds.

For the fourth time this year, the stage was set for an all-DSR Dodge Funny Car final elimination showdown, and Johnson was prepared to seek vengeance on Hagan in what was a rematch of the Indy 1 final round where Hagan emerged with the trophy. The tree lit up and Johnson launched ahead of Hagan, powering the MD Anderson Dodge to a stellar 3.884-second run, narrowly edging past his teammate with a margin of victory of less than 13-thousandths-of-a-second. Johnson’s triumph earned trophy No. 353 for DSR.

“What a different set of circumstances from last weekend at Gainesville where it was hot and humid, to come to St. Louis where it’s cold and the track is tight,” said Johnson. “My guys did a great job of adapting. It’s really hard to make your cars run well in these conditions. The cars want to run good, but it’s hard to get them down the track.

“The team did a great job of adjusting and made the right changes and it kept getting better and better with each run,” said Johnson speaking of his string of four consecutive sub-four-second elimination round passes. “Racing teammates (Jack) Beckman and (Matt) Hagan in the final was some of the best drag races all weekend. It was close and it was tight and if you want to win this championship you have to step up to the plate. Today this MD Anderson Dodge Charger SRT Hellcat stepped up to that plate. It was just an outstanding car and the fans got a show at the Mopar Express Lane Midwest Nationals presented by Pennzoil with the win.”

While Johnson remains in third, he is within close striking distance of his teammates who occupy the top two spots. Johnson sits within 18 points of No. 2 ranked Beckman, and 34 points behind No. 1 ranked Hagan.

“The last couple races have been “must do well” races and you look over there (at DSR teammates) and they’re still going rounds, so when you do face-up against them, it’s a must-win. You can’t let them keep going rounds and you fall a round behind. It was huge to be able to take out both of them (Beckman and Hagan) today and keep ourselves securely planted in it and make it a solid three-man race right now. We look forward to making Doug Chandler proud.”
Qualified: No. 8 (7.220 E.T. at 118.97 MPH) 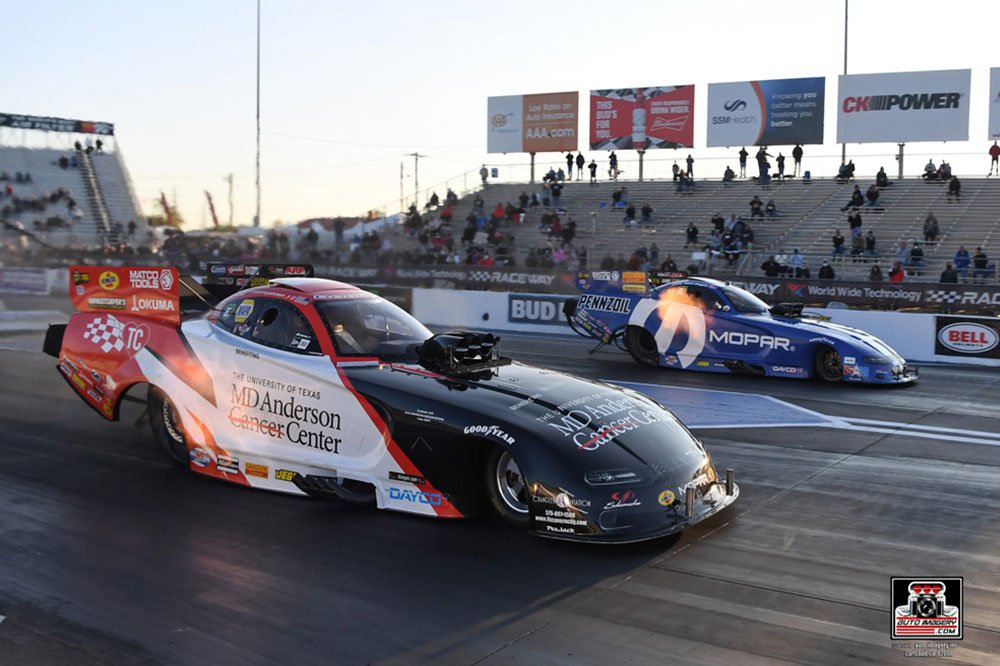