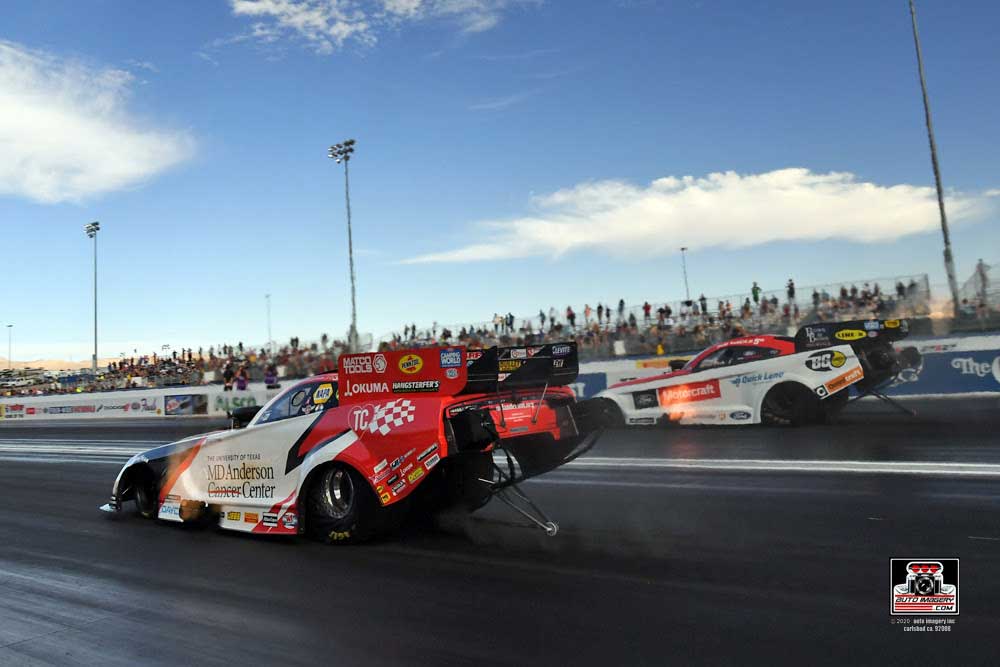 Race Recap:
Tommy Johnson Jr. started the year with a new cause adorning the side of his Doug Chandler-sponsored Dodge Charger SRT Hellcat ‘giving car.’ Bannering the University of Texas MD Anderson Cancer Center, Johnson wasted no time parking the red-white-and-black machine in the winner’s circle when he drove to victory in Phoenix at the second event of the season.

Johnson then went on to claim the No. 1 qualifying position at the first event back after the four-month COVID-19 pause, racing to a runner-up finish at the first of four Indianapolis events and prominently positioning himself as a viable championship contender. By claiming two more victories in St. Louis and Houston, Johnson made sure he was in the title conversation heading into the final race of the year.

As the No. 2-ranked driver, Johnson began race day at the Dodge NHRA Finals presented by Pennzoil with a two-round deficit that would need to be overcome to oust teammate Matt Hagan from the No. 1 spot. Johnson took the No. 4-qualified MD Anderson Dodge to victory over Jim Campbell and Bob Tasca III in the first two elimination rounds, keeping himself solidly in contention until he suffered a semifinal defeat to Ron Capps, which abruptly ended his chase for a first Funny Car world title.

“It was a great season, we came close. Matt Hagan and his team did a great job this season. I’m just so proud of my guys on this MD Anderson team. It was a very difficult 2020 year and to come down to the last few rounds of the year and to have a shot at winning the championship is nothing to hang our heads about. It’s disappointing to get so close and not get it, but at the same time it was a great season and I’m proud of our second-place finish. Hopefully something comes around and we can have a shot again next year. All-and-all a great season. Very happy for the Chandlers and to have their cars finish second and third is pretty outstanding.”

About Don Schumacher Racing:
Established in 1998 as a single-car Top Fuel team, Don Schumacher Racing (DSR) has grown to become the winningest organization in NHRA Drag Racing history. Including team owner Don Schumacher’s five NHRA Funny Car titles from the 1970s, DSR’s current win count stands at 358, and DSR is one of a very small handful of teams in the motorsports industry to surpass the 350 milestone. DSR owns 18 world championships in three different NHRA categories.