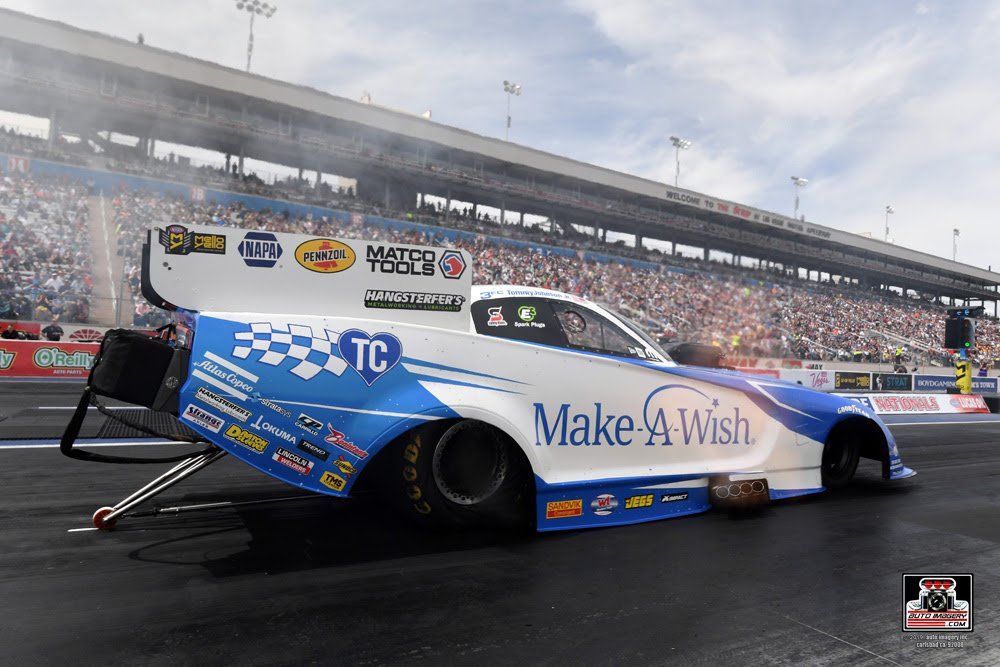 Race Recap:
Tommy Johnson Jr. raced to a runner-up finish on Sunday at his 450th professional event. For the second year in a row, Johnson and the John Collins-led Make-A-Wish Foundation Funny Car team raced for the Vegas Four-Wide Nationals Wally trophy by advancing to the final eliminations quad.

After registering a winning E.T. in round one, Johnson faced tough competition in his round two matchup. The stacked quad featured Jack Beckman and Ron Capps behind the wheel of their DSR Dodges, and Funny Car juggernaut John Force. Johnson was quick off the starting line clocking the best reaction time of the group, and powered his Hellcat to the quickest lap of the round, lighting up the scoreboard with a 3.994 E.T.

The final eliminations quad pitted Johnson against fellow ‘giving car’ pilot Jack Beckman, reigning world champion J.R. Todd, and No. 1 qualifier Tim Wilkerson. Johnson laid down another solid pass and maintained pace with Todd until just before the finish line when Todd pulled ahead and captured the win. Johnson’s performance was recorded as a runner-up finish and the two-time LVMS winner jumped up to third in the Funny Car rankings.

Quotable:
“It was an interesting day for sure. For all four cars to lose traction in the first round, but get the win and set low E.T. in the second round was really good. We were confident going into the final round. We knew we had a good race car. We just came up a tick short. We got our car back and we’re really close to getting a win. It was a good points day and we moved up to third. I feel we got the bad luck out of the way and I’m looking forward to the next few races with Houston and Charlotte in April. We have a really good car with this Make-A-Wish Dodge.”