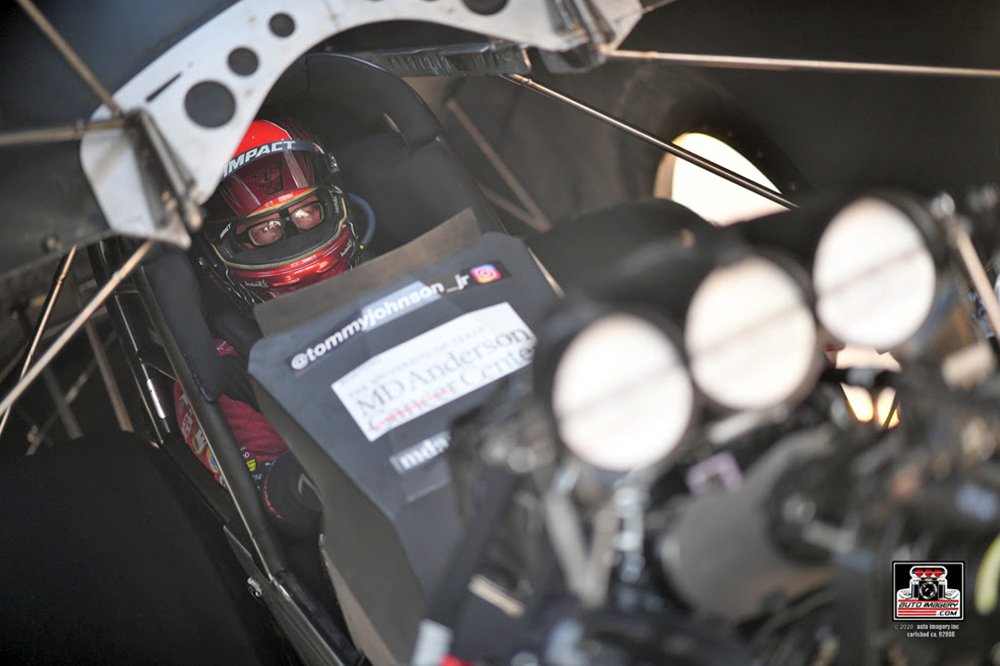 Race Recap:
Tommy Johnson Jr. and the John Collins/Rip Reynolds-led MD Anderson Dodge Funny Car team have been on a tear all year. They were victorious at the NHRA Arizona Nationals before the season was suspended for four months due to COVID-19, and picked up right where they left off when the season resumed in Indy last month. Since the NHRA restart, Johnson raced to a runner-up finish from the pole at Indy 1, a semifinal appearance from the No. 2 qualifying position at Indy 2, and on Saturday at the Dodge NHRA Indy Nationals presented by Pennzoil, Johnson earned the 20th No. 1 qualifier of his career to start from the pole yet again.

Since Phoenix, Doug Chandler’s ‘giving car’ tandem of Jack Beckman and Johnson have occupied the No. 1 and No. 2 spots on the Funny Car championship leaderboard. Johnson has steadily crept up on Beckman’s No. 1 standing, and on Sunday, he surpassed his teammate to take over the point lead. He moved into the lead when he powered his Dodge Charger SRT Hellcat to low E.T. and top speed of the weekend in round one to defeat Alexis DeJoria. After a dominant round one showing, Johnson looked prime for a long day of going rounds but suffered the upset loss when his machine lost traction in round two, and his opponent, Paul Lee, was able to record the win.

Quotable:
“That was very surprising. I wasn’t expecting that second round. We’ve had such a flawless race car going down the track each lap and it caught me off guard when it pulled ‘em loose out there. It seemed like it was on a good run and just drove into smoke. It’s both surprising and frustrating, but you can‘t get too disappointed. You lick your wounds and move on, learn from this, and be better. We’ll figure out why and address that. To qualify No. 1 again and come out of here with the points lead is a positive.”