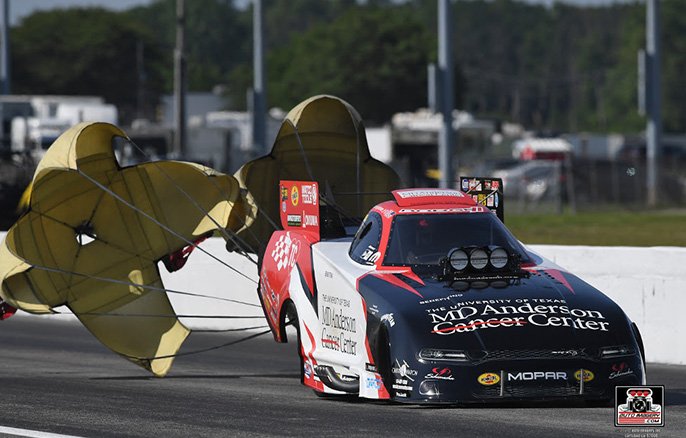 Due to persistent rain showers, Sunday’s final elimination round at the Lucas Oil NHRA Summernationals at Indianapolis has been postponed until the NHRA U.S. Nationals, September 4-6. A date has not yet been announced for the rescheduled final round.

Jack Beckman and Matt Hagan both advanced to the Funny Car final round, and will battle it out for the trophy during the to-be-announced rescheduled date and time.

Race Recap:
Fresh off a runner-up finish from the pole at last weekend’s Indianapolis event, Tommy Johnson Jr. looked prime for another long race day of going rounds. He started Sunday morning from the No. 2 position on the ladder, and his strong showing in qualifying moved him temporarily into the Funny Car point lead ahead of teammate Jack Beckman.

Johnson began his elimination run by defeating Bob Bode in the first round and powering the MD Anderson Dodge to the second-quickest pass of round two to trailer Cruz Pedregon. The semifinal round featured a DSR ‘giving car’ match-up with Johnson set to square off against Beckman. Johnson was out of the gate first and made a solid pass, but his 4.027 couldn’t keep up with Beckman’s 3.969 E.T. By taking the round win, Beckman moved back into the Funny Car point lead with Johnson, the 2020 Phoenix winner, now occupying second place.

Quotable:
“It was another good weekend for this MD Anderson Dodge team and we’re just keeping our momentum going. Another solid qualifying effort and some more round wins. We just didn’t have enough in the semis against (Jack) Beckman, but I’m very happy with how our team is performing. (Matt) Hagan’s car is running great and it’s shaping up as a three-way DSR Funny Car battle for the championship and I’m glad we’re a part of it. It’s fun. We’re getting quite a bit of data for racing here and in hot, humid conditions, and that will continue to benefit us during these summer months. We get a few weekends off and the team needs that before we get to go after that Wally trophy here at Indy in three weeks.”

*Denotes potential point total based on winning the to-be-contested Indy 2 final round.