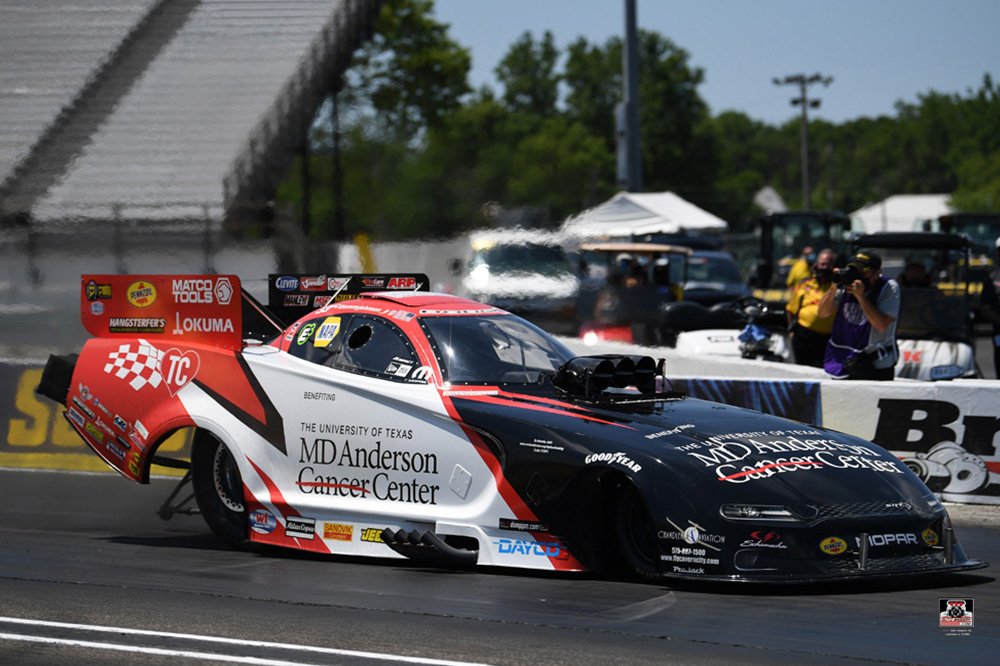 Race Recap:
Tommy Johnson Jr. came oh-so-close to securing his second consecutive win of 2020 on Sunday during the E3 Spark Plugs NHRA Nationals. Johnson entered the race weekend as the most recent Funny Car winner on tour and continued to dominate the class by claiming the No. 1 qualifying position after two sessions on Saturday. During race day, Johnson appeared to be unstoppable as he laid down three stout passes to make a deep-dive through the competitive Funny Car field.

A resident of nearby Avon, Ind., Johnson began eliminations with a first-round matchup against his DSR Dodge teammate, Ron Capps. It was clear Johnson and his John Collins/Rip Reynolds-led MD Anderson Funny Car team weren’t taking their stablemate lightly. The crew chief duo turned up the wick and tuned Johnson to a 3.896 – low E.T. of the meet – to defeat Capps and earn lane choice over Blake Alexander in round two. Alexander had problems from the get-go and was unable to stage his machine. Johnson let loose with a 3.963 E.T. on a solo to set up a semifinal battle with J.R. Todd. Once again, Johnson’s MD Anderson machine looked flawless as he navigated it down the track in 3.959 seconds, earning a bid to the final round where he would face another DSR Dodge teammate, Matt Hagan.

Johnson was seeking not only his first Indianapolis trophy but a spot at the top of the Funny Car leaderboard. He entered the round sitting a mere two points behind leader Jack Beckman, and a win would have ensured him the No. 1 position. Johnson stood on the gas and almost immediately, his car dropped a cylinder, while Hagan drove by for the win.

Quotable:
“I’m kind of disappointed, but it’s hard to be disappointed when you go to the final round and get a No. 1 qualifier. We have a great car, just like we did at Phoenix. Out of nowhere it put a cylinder out and (crew chief) John (Collins) did the right thing by trying to shut me off and just after he did that, I watched Matt (Hagan) blow up. I think I could have beat him on seven (cylinders), but it was probably the right decision to not risk hurting parts. It’s still a great weekend and we have such a solid race car, and with a shortened season and no Countdown, being near the top of the points is the most important thing.”