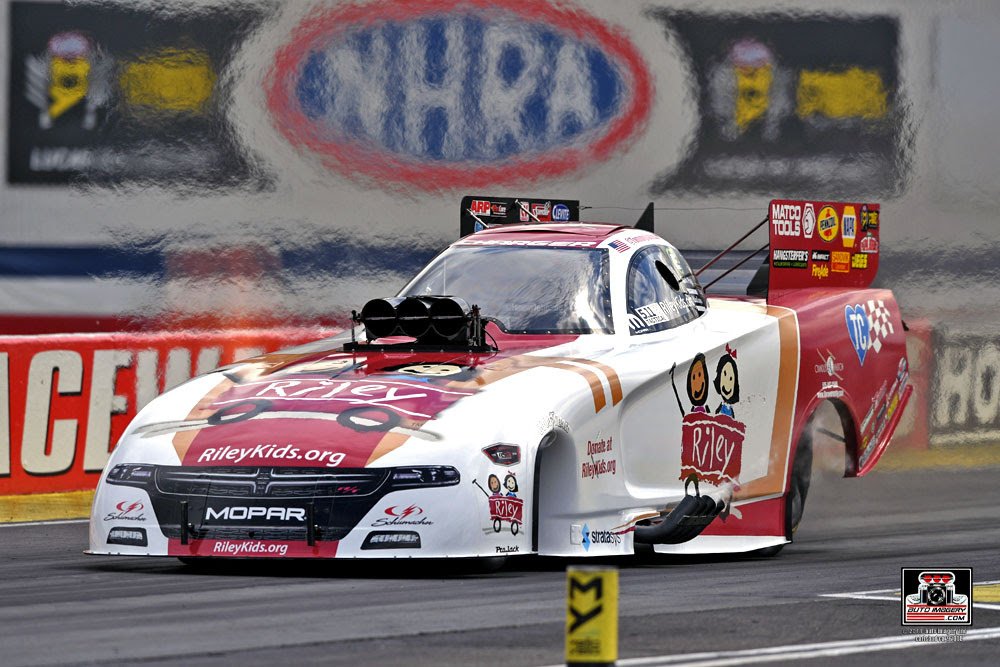 Race Recap:
Armed with the confidence boost of a runner-up finish at the most recent event and an impressive performance throughout all three days of qualifying for the NHRA U.S. Nationals, Tommy Johnson Jr. looked prime for a long day of going rounds on Monday.

Behind the wheel of the Riley Dodge Charger R/T, Johnson earned a No. 4 qualifying position to start race day and drew teammate Ron Capps in the opening round of eliminations. Johnson moved first and led the entirety of the 1,000-foot stretch, despite dropping cylinders down track.

The quarterfinal round found Johnson with lane choice over Tim Wilkerson. Once again, Johnson prevailed, earning the win in the Riley car, a once-a-year tribute to the local children’s hospital at DSR’s hometown event. Johnson’s quick reflexes coupled with a stout 4.085 second pass, which held up to be low E.T. of the session, provided the advantage of lane choice going into the semifinals.

Against defending Indy Funny Car champion J.R. Todd, Johnson held on to the initial lead until just before halftrack when Todd pulled ahead and took the win, ending Johnson’s day at the semis. While the day didn’t end with the Riley car in the winner’s circle, Johnson and the team still count the weekend a success. The Doug and Terry Chandler funded giving car once again showcased Riley on a national platform, and a bigger victory was won earlier in the race weekend when DSR successfully raised more than $86,000 for Riley Hospital for Children at the team’s annual Open House event presented by Pennzoil.

Johnson will start the NHRA Countdown to the Championship ranked seventh.

Quotable:
“We had a really good car; a really good showing at Indy. We came up a round and a half short, but we’re really pleased with the way our car is running. We’re continuing the performance we’ve had the last few races and it’s a really great way to go into the Countdown. We’ll be a car to contend with. Would’ve loved to win Indy for Riley and all of the kids, but now we’re going to focus on winning the championship.”