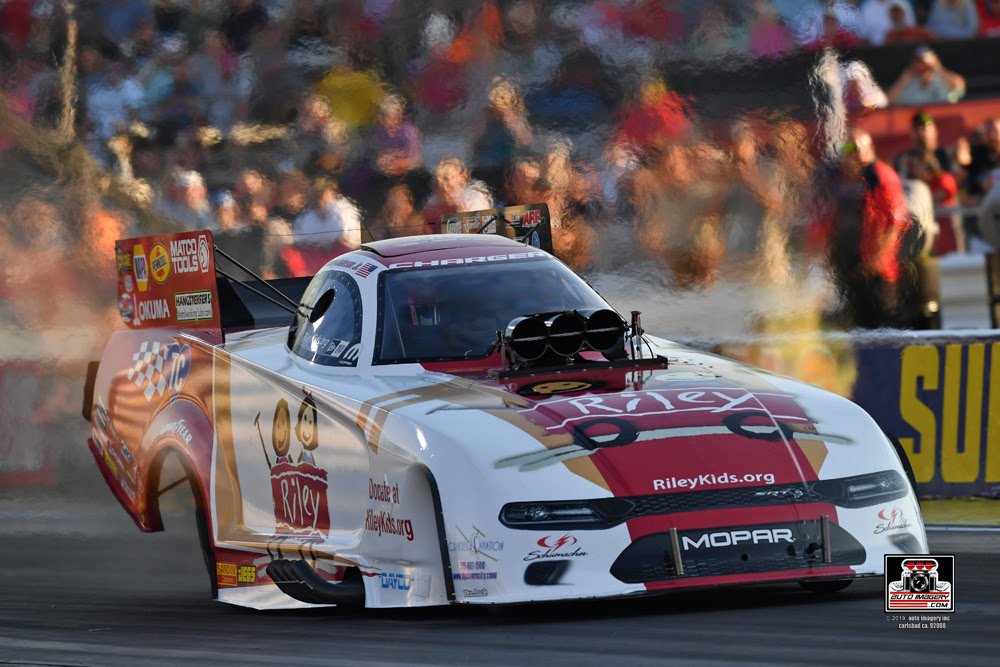 Race Recap:
Tommy Johnson Jr. is in the midst of a career-best season, and the two-time 2019 Funny Car winner was looking to add a U.S. Nationals triumph to his list of accomplishments. After struggling during the first two days of qualifying, Johnson put the Riley Kids Dodge Charger SRT Hellcat in the field Sunday with a pair of solid runs to grab the No. 10 position for Monday’s eliminations. Unfortunately, in his first-round race with Shawn Langdon, the issues resurfaced. Johnson left first, but his machine quickly overpowered the track and lost traction. Langdon made a clean run to defeat Johnson, who coasted to a pass of 9.686 seconds. Johnson will now turn his focus to preparing to chase his first Funny Car championship from the third position in the standings.

Quotable:
“It wasn’t the Indy we were looking for. We had a strong car coming in here, and it was just one of those weekends where we just never hit it. We struggled all weekend with a lot of issues. Not the weekend you want that to happen, but at the same time if it’s going to happen, let’s get it out of the way before we get to the Countdown where it’s really important. We’ll shake this off and go out to Reading and start the Countdown. We are going to start it in the best position we ever have, and this team has a great chance at winning a championship. We’re excited to get to Reading and kick things off with the MOPAR Mega Block Party, and the activities that surround that race. Earlier this year in Denver, we were able to win the race for Dodge and MOPAR, and hope to do it again in Reading.”