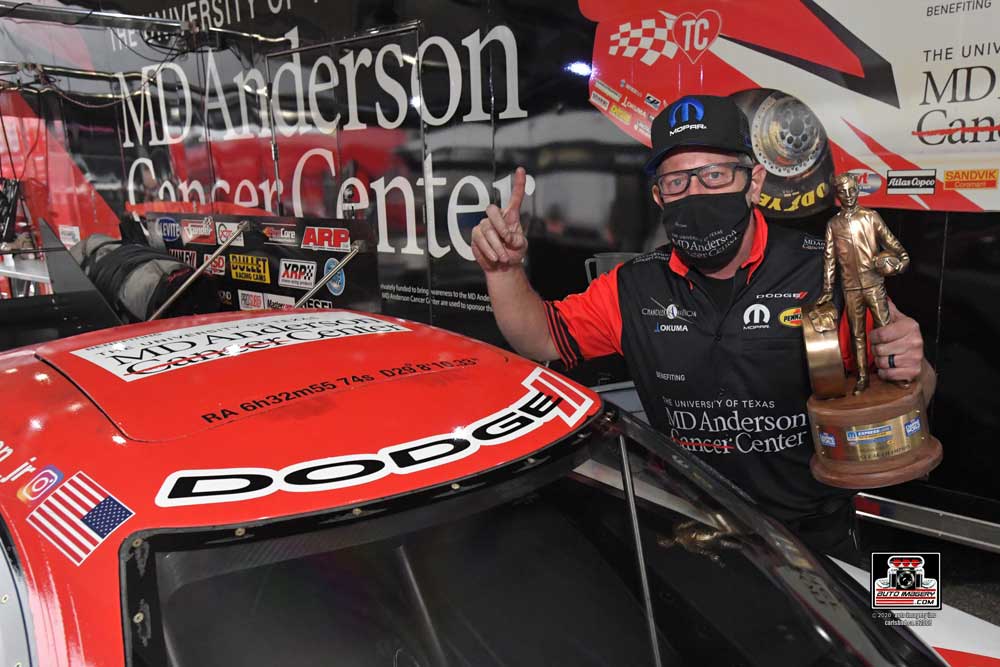 BAYTOWN, Texas (October 25, 2020) – Don Schumacher Racing doubled-up for the 66th time during the Mopar Express Lane NHRA SpringNationals Presented by Pennzoil, upping the trophy count to 356 for drag racing’s winningest organization. Tony Schumacher and Tommy Johnson Jr. raced to victory in their respective categories, with Schumacher picking up his first win since returning to the seat of a Top Fuel dragster earlier this summer after a year-and-a-half hiatus, and Johnson earning the 13th consecutive Funny Car triumph for DSR.

Bannering the University of Texas MD Anderson Cancer Center, Johnson delivered the hometown victory for the Houston-based organization by battling through a stacked Funny Car field. Johnson, who entered the weekend ranked third and 77 points out of first, fought his way solidly back into the thick of the heated championship chase by claiming his third victory of the season, and first at Baytown, on Sunday afternoon at Houston Raceway Park.

Aboard the Doug Chandler-sponsored MD Anderson Dodge Charger SRT Hellcat, Johnson started from the top half of the field and picked off Jim Campbell and J.R. Todd in the first two elimination rounds. In the semifinals, he prevented point leader and teammate Matt Hagan from adding to his point total by powering to a winning 3.941 E.T. to advance to his fourth final round appearance of the season. Against Ron Capps, another DSR Dodge stablemate, Johnson set off the win lights once again, lighting up the scoreboard with his 3.929-second pass to earn his 22nd nitro triumph. The victory not only kept DSR’s undefeated Funny Car streak alive, extending it to 13-in-a-row, but helped Johnson move into second in the championship standings, and narrow in on Hagan, who holds a 42-point lead over Johnson heading into the points-and-a-half season finale in Las Vegas next weekend.

“It was a must-win,” said Johnson, who is aiming to close out his seven-year Chandler family ‘giving car’ run by delivering his first Funny Car world title for Doug Chandler. “We get close and then we stumble, and we think we’re out of it, and here we come again. We just keep coming back. It’s like a heavyweight battle and when we get knocked down, we get back up and keep swinging. I’m just really proud of these guys. They never quit. I’m just super happy with the fight in these guys and this has got drama written all over it when we go to Vegas. You’ve got to keep digging and you knew the final round was going to be a great race. It’s definitely been different this year, but once you fire the engine it’s no different. (Crew chiefs) John Collins, Rip Reynolds, and the whole MD Anderson team has done a really good job under some tough circumstances.”

In Top Fuel, Schumacher gave DSR its first Top Fuel win of the season, and first nitro-sweep since the 2019 Brainerd event. Driving the Okuma/Sandvik Coromant Toyota Top Fuel dragster, second-seeded Schumacher opened his day with a first-round win over Cameron Ferre, then followed it up with victories over Doug Foley and Billy Torrence to advance to the finals against point leader Steve Torrence.

Both drivers turned in strong reaction times with Torrence having a slight advantage, but Schumacher ran him down by the 330-foot mark. The two heavy-hitters raced side-by-side through 600 feet, separated by just .001 seconds. The eight-time world champion then held off Torrence with a margin of victory of just .002 seconds, winning with a 3.669-second pass at 330.63-mph – the quickest pass of the weekend.

“We’ve only had a handful of races back as a team and they’re doing a great job for Sandvik, Okuma, and Toyota,” said Schumacher, a Texas resident who earned his NHRA record 85th Top Fuel win. “And Camping World, thank you for stepping up. It feels unbelievable. Both the semis and the finals were outstanding races. That’s about as rewarding of a day as anybody can have. We’ve been through three race cars in six races. We qualified excellent, then lost our car after Leah (Pruett) broke in St. Louis. We had to take a new car out and that’s just the second race on it. That car hasn’t made two dozen runs down a race track and (crew chief) Mike Green and this Okuma/Sandvik Coromant Toyota team just went out and figured out how to win a race with it. Unbelievable.” 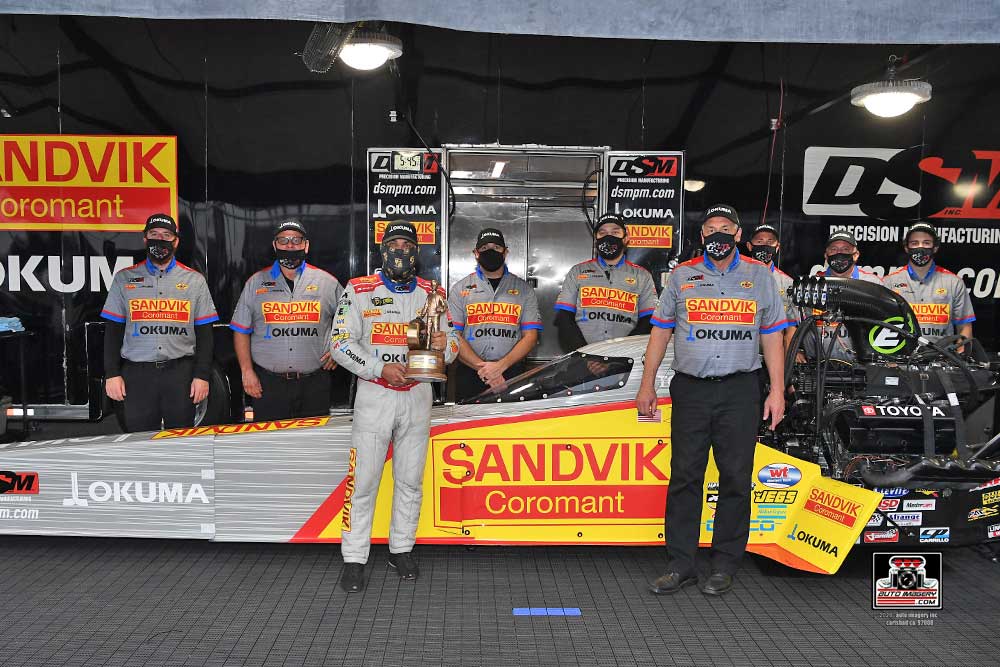 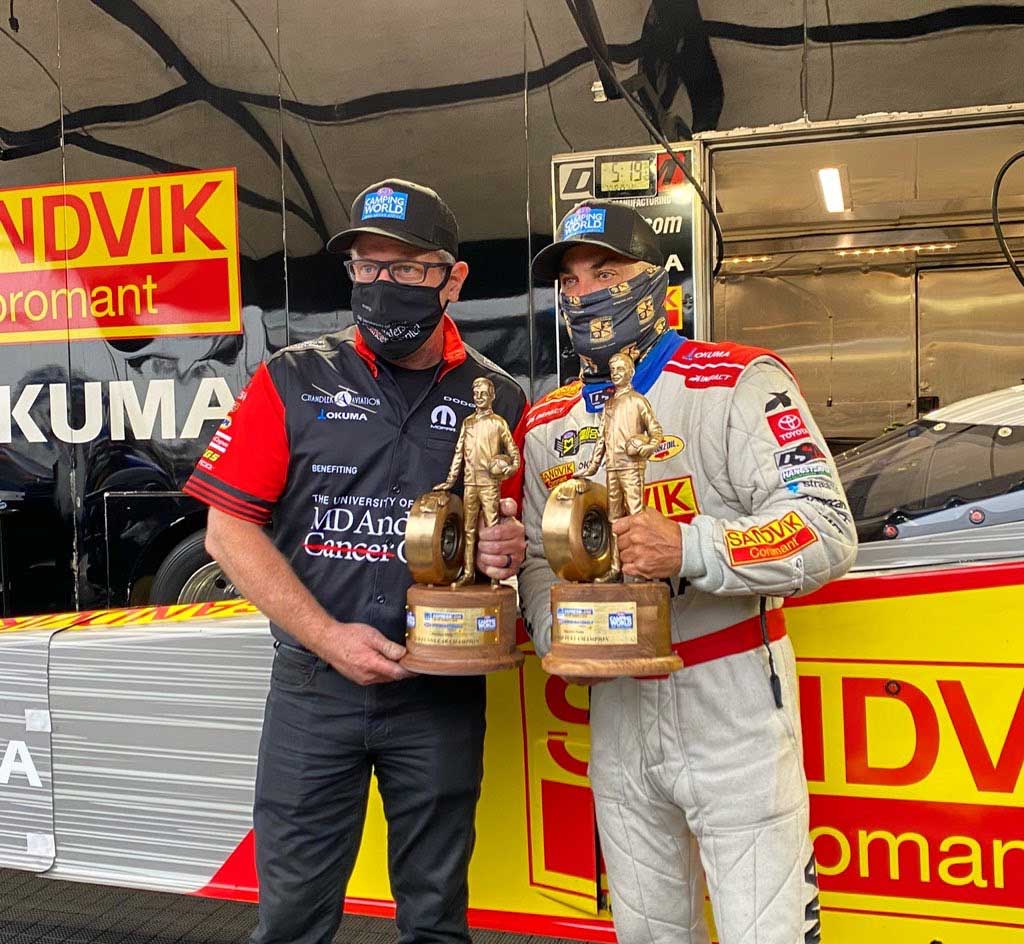