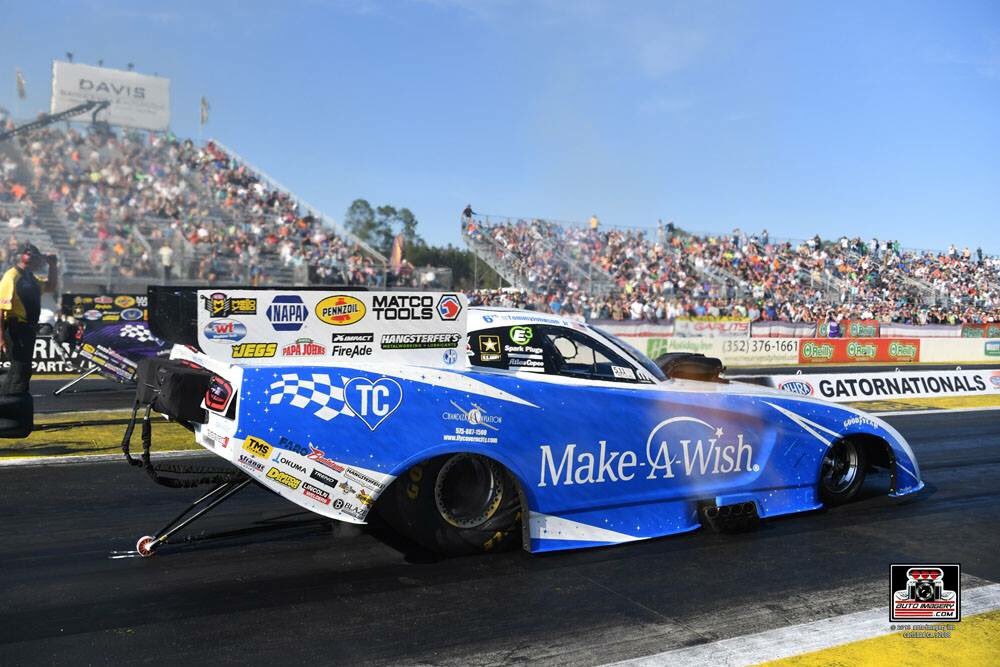 The Competition: No. 12 Cruz Pedregon

Quotable:
“We’re struggling with the changes. The six-disc clutch is still new to us. This is the first hot track conditions we’ve seen with it so we’re making ground. We made a nice run in the best conditions of the weekend so tomorrow will be more like we’ve seen today. So we’re have to learn from what we did during these two runs and put that together to make a nice solid day.”

GAINESVILLE, Florida (March 17, 2018) – No one was able to top Jack Beckman and the Infinite Hero Foundation Funny Car team during day two of the NHRA Gatornationals. The Dean Antonelli, John Medlen, Neal Strausbaugh-led team’s 3.911-second Q2 pass held up to be best of the weekend, earning Beckman his first No. 1 qualifier of the year, and 24th of his career. It is the 2012 Funny Car World Champion’s second pole at Gainesville Raceway.

After two class-best runs on Friday, Beckman made two more respectable runs during the third and fourth qualifying rounds on Saturday. While not low E.T. of the session, their 4.025-second pass was fourth best of the round, and their 4.007 from Q4 earned the team one bonus point for third quickest.

“Our two runs today we went 4.00,” said Beckman, a 26-time Funny Car winner. “The first one, we dropped a hole at 300-feet, and in the second one we just backed it up too much. We were still ‘top four’ in both sessions and made it down the track every run.”

With four solid runs in the books and conditions that promise to be similar to Friday, Beckman feels confident in his team’s abilities to put Terry and Doug Chandler’s Infinite Hero Foundation Dodge Charger R/T in the Winner’s Circle on Sunday.

“I love the fact that we did everything pretty darn good for four runs over the course of the two days here. I think it gives us a leg up going into tomorrow. We’ll have lane choice and we’ll get to pick when we’re going to run. We could make a poor decision, but I like that it’s our decision to make.

“I think by and large, you make your own luck. The team services the car perfectly, the crew chiefs put their heads together, go over data from past runs with similar conditions and make an educated tune-up there, and then you try and outdrive the person in the other lane. You race the race track. We have to do everything a little bit better than they do, but in our lane.

“It is a difficult track. The conditions for first round will be very similar to yesterday’s first qualifying session, and I think we will tune off of that one.”

Beckman’s campaign for his first Gatornationals Wally begins with a matchup versus No. 16 qualifier, Jim Campbell.

The Competition: No. 16 Jim Campbell