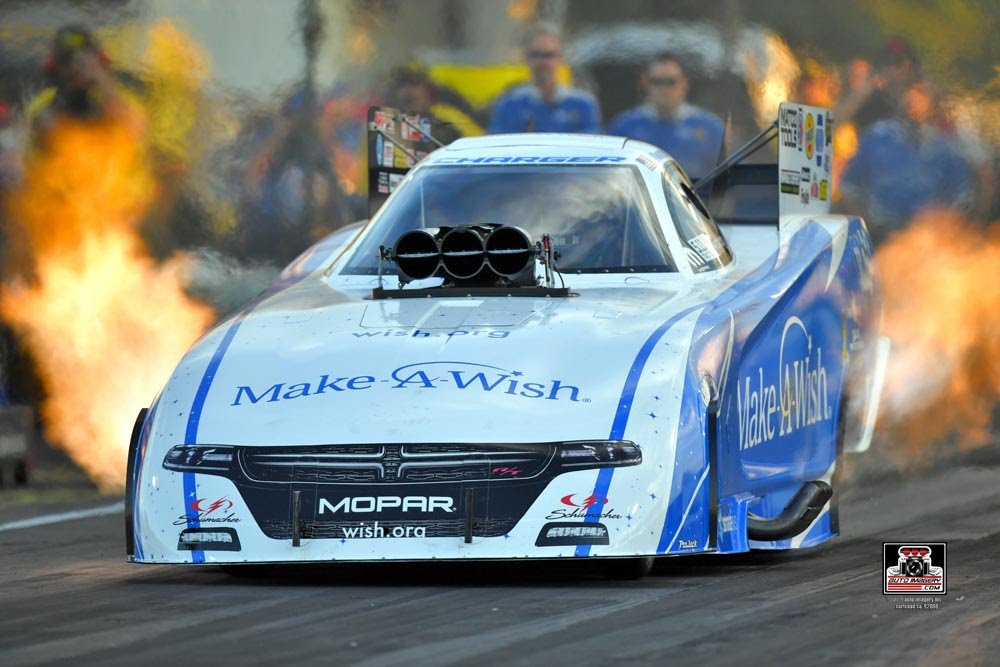 ENNIS, Texas (October 6, 2018) – Tommy Johnson Jr. will start race day at the AAA Texas NHRA FallNationals from the No. 1 spot after powering the Make-A-Wish Dodge Charger R/T to a 3.918-second at 321.73-mph pass in the fourth and final qualifying session.

The No. 1 qualifier is the sixteenth of Johnson’s career, first of 2018 and first at Texas Motorplex. He finished Friday night as the provisional No. 1 qualifier after running a 3.958 E.T. in Q2 but watched as his top-seeded run was ousted from the No. 1 spot by Bob Tasca III’s 3.950-second pass during the third qualifying session on Saturday. Johnson and the Make-A-Wish Foundation team fired back by posting a blistering 3.918 E.T. in the sweltering Texas heat during Q4 to reclaim the pole position.

“In the car driving, I could tell it was a good run, it felt really good,” said Johnson who claimed seven out of 12 possible bonus points over the course of the weekend. “With the conditions out here, I thought we could squeak a 94 out of it, maybe a high 93 but a 91 is pretty impressive. I was shocked, I couldn’t believe it went 91. John (Collins, crew chief) seemed awful confident on the starting line and now I know why. Obviously, he had full intentions of taking (the No. 1 spot) back.”

After a solid Friday/Saturday outing, Johnson feels confident in his team’s abilities to make it a long Sunday of going rounds, noting that the Make-A-Wish team had the advantage of using Q3 and Q4 as a means to gather information.

“Q3 was an experiment to try something and see what we could get away with, and it made it easy to address the issue. With the little bit of cloud cover here and there, it was still pretty warm during Q4 so I didn’t know if there was a 91 out there. John mentioned he was trying to run a low 90 last night and didn’t get that, so I think he went back and worked on last night’s Q2 run for Q4, and it did what he told it to.

“My boys are pretty happy. Starting from No. 1 helps boost morale. You’re in the fight to try and win this championship. The better you do, the more confidence you have, and you seem to do better and better with the more confidence you get. For me, going up there knowing you have a really good car, it takes some pressure off. I know I can just go up there and race.”

The Make-A-Wish Dodge Charger R/T Funny Car team will start race day by taking on No. 16 qualifier Terry Haddock in round one as they seek their first victory of the season.

The Competition: No. 16 Terry Haddock