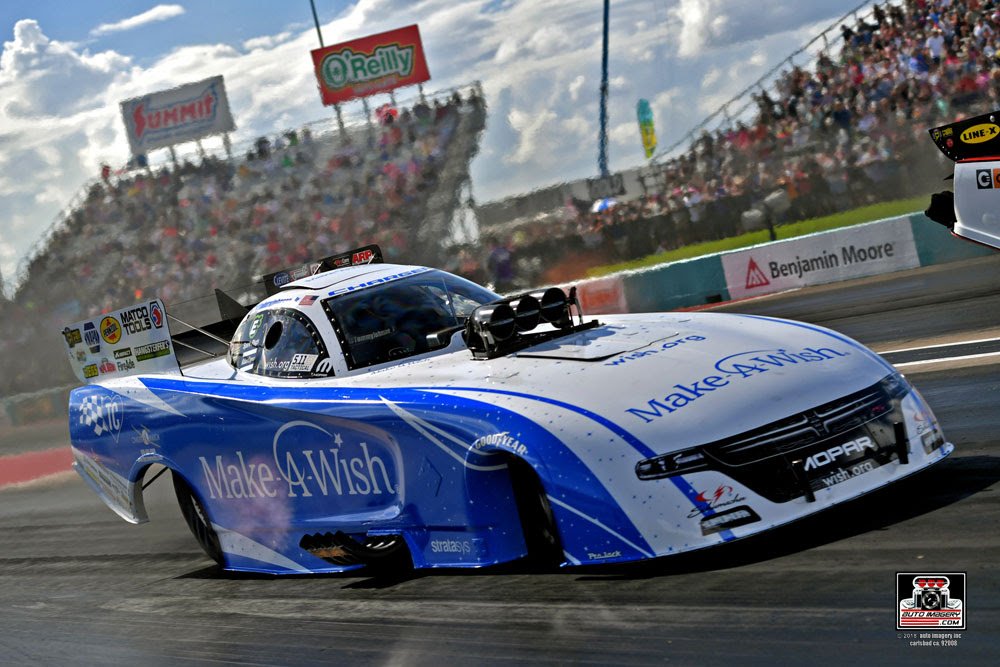 Race Recap:
Tommy Johnson Jr. unleashed a 3.918-second run in the fourth and final qualifying session in his Make-A-Wish Dodge Charger R/T Funny Car to claim the sixteenth No. 1 qualifier spot of his career, his first of 2018 and first at Texas Motorplex. Johnson had a big advantage off the starting line in scoring a round one defeat of Terry Haddock with his 3.981-second pass, the third lowest E.T. of the session.

In round two, the John Collins-tuned Dodge posted another stellar E.T., a 3.937-second pass — the quickest of the quarterfinals — to take out Cruz Pedregon.

During Johnson’s sixth semifinal appearance of the last seven events, he recorded a clean, solid 3.964-second at 321.58-mph run but was behind from the start against opponent J.R. Todd and was unable to make up any ground, ending his day. Johnson moved up to fourth in the Countdown playoff standings with his Dallas performance.

Quotable:
“We’ve got a really good race car now it’s just a matter of putting it all together on Sundays. The continuous improvement is great and hopefully we can keep doing that and have a little luck go our way. We feel really good. If a few of the top cars stumble, we’re right there. We’re in the hunt and not out of this championship yet.”