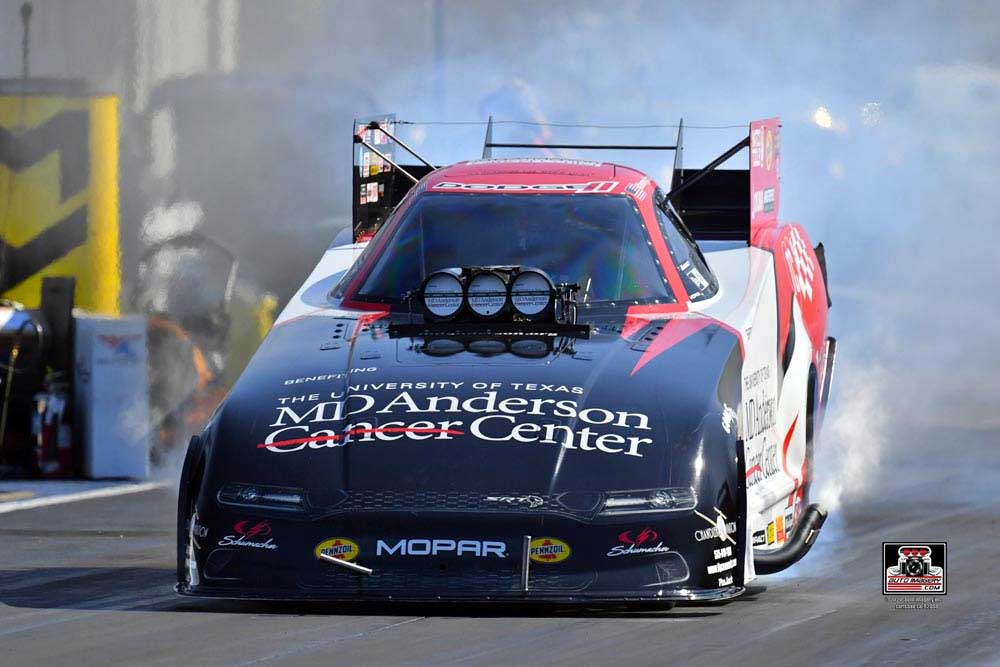 Race Recap:
Fresh off a win from the previous event, the momentum from Tommy Johnson Jr.’s strong performance in St. Louis carried into qualifying at Ennis, Texas. Johnson entered the race weekend ranked third and with 34 points separating him from his teammate and point leader, Matt Hagan, Johnson knew a solid outing at the FallNationals would be crucial to his championship chase as he continues to work toward capturing that elusive first Funny Car title. By powering the MD Anderson Dodge to the quickest E.T. of the opening qualifying session and earning the No. 2 starting position, Johnson looked prime for a long day of going rounds at Texas Motorplex. He used his reaction time advantage coupled with a solid 3.948 E.T. to easily dispatch Jim Campbell in round one of eliminations and set up a second-round showdown with Bob Tasca III. Once again, Johnson moved first, but traction issues early into the run forced him to shut the car off and his competitor was able to drive away with the win.

Johnson remains in third heading into the final two events of the season, and while he wasn’t able to make up ground in Ennis, a strong showing in Houston will put him right back in the thick of the championship hunt.

Quotable:
“That was surprising and disappointing. We had such a great running car all weekend. I didn’t expect the tires to come loose. We needed to win that round to keep pace, but that didn’t happen. We aren’t out of this thing yet. There’s two races left and points-and-a-half at the last one in Vegas. We need to do our job and go rounds and try to win the next two. Still, very happy with this team and happy to be able to race with such a great group here at DSR.”