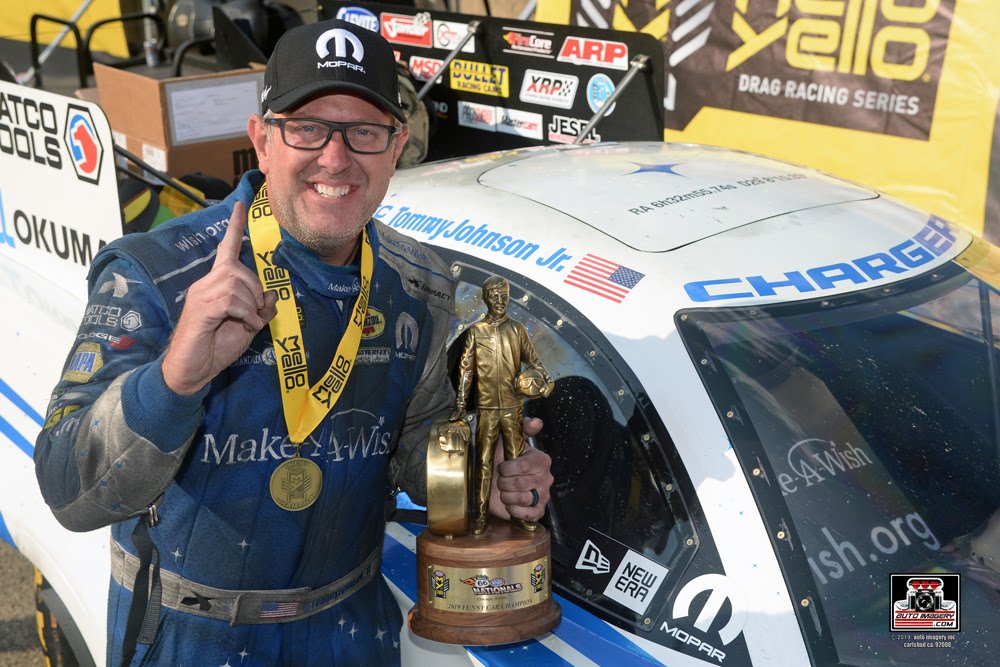 JOLIET, Ill. (June 2, 2019) – Tommy Johnson Jr. raced to his first win of the season at the 22nd annual Route 66 NHRA Nationals near Chicago on Sunday, moving up to second in the Funny Car point standings and bringing home the third consecutive Don Schumacher Racing win, and fourth this year.

The win was the 18th of Johnson’s career in his 50th overall final, and marked his first victory since the NHRA Finals in November 2017, ending a 32-race drought. The triumph was also the second for the Make-A-Wish Dodge Charger SRT Hellcat driver in five career final-round appearances at Route 66 Raceway.

Johnson kicked off race day from the No. 2 spot after a strong qualifying effort that saw the 2015 Chicago event winner collect six bonus points. He posted a steady 3.946-second E.T. in round one to defeat Paul Lee and was even better in the quarterfinals with the quickest pass of the round at 3.941-seconds to outrun teammate Matt Hagan.

Johnson left first in the semifinals against John Force with a quicker .081-second reaction to Force’s slower .137 mark, earning him the holeshot win on a 3.972-second run and a chance to run for the Wally trophy. Pitted against the current Funny Car point leader, Robert Hight, in the final round, Johnson took the win in dramatic fashion, overcoming a “boom and bang” under the hood to hold off Hight, who smoked the tires in the opposite lane.

“It makes your heart stop for a second because you’re sitting there coasting and you know he’s got to be there somewhere,” said Johnson of his nail-biter of a final round. “It’s the longest coasting you’ve ever done in your life. You’re thinking ‘come on, get there,’ and then I saw the light come on and I was just so thrilled for the guys and (team sponsor) Doug Chandler. He continued this program in his wife, Terry Chandler’s, honor so I’m happy we could get this win for him. We’ve been close a lot – six times we were there in the final and couldn’t get it done, so it was nice to finally do that.”

Following Terry Chandler’s passing, the Make-A-Wish St. Louis chapter purchased a star in her honor. Johnson’s Make-A-Wish Funny Car proudly features the coordinates of the star as a reminder that the late drag racing enthusiast is always watching over them. Sunday’s win at Route 66 Raceway was the first time they’ve finished the day in the winner’s circle since adding the star’s coordinates, making the victory even sweeter.

“That was actually (crew chief) John Collins’ idea to put the coordinates of her star on our roof hatch,” explained Johnson. “The roof hatch comes up every time I get out, and every time I turn around and look at it I see the coordinates, so I know she’s always there. She’s a lasting impact on our team and she’ll be with us forever.”