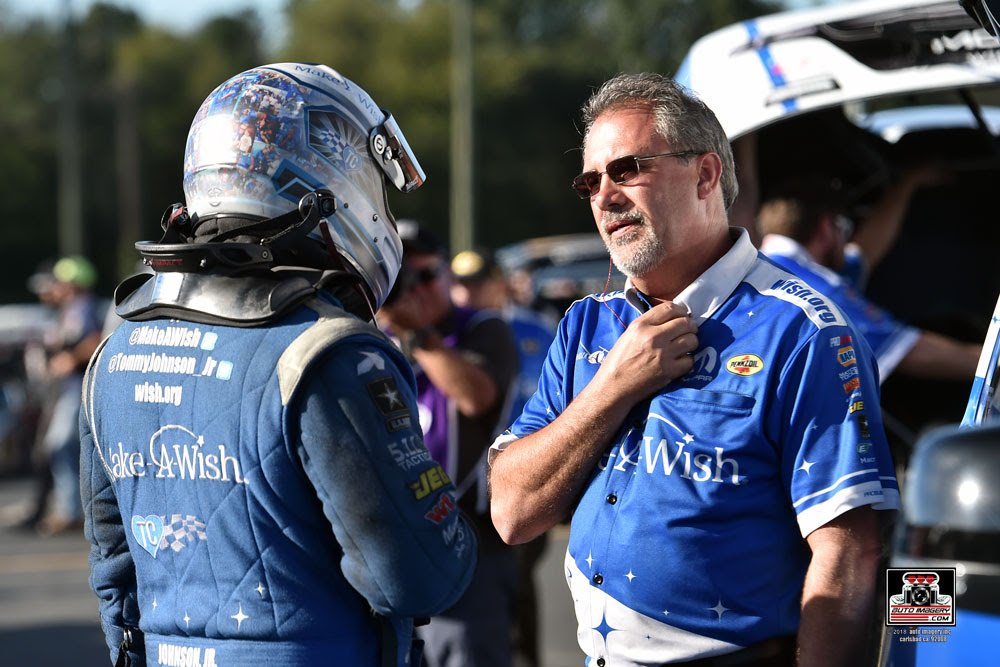 CONCORD, North Carolina (October 13, 2018) – Tommy Johnson Jr. locked down the No. 1 Funny Car spot to start race day at the NHRA Carolina Nationals in Concord, N.C. Johnson nabbed the pole for the second consecutive weekend, marking the first time in his career that he has qualified No. 1 at back-to-back events.

Johnson claimed the top spot when he powered the Make-A-Wish Foundation Dodge Charger R/T down the zMAX Dragway strip in 3.873-seconds at 329.26-mph during Q4. At the start of the final qualifying session, Johnson was positioned fourth, standing on his Q1 run of 3.901-seconds, which was the quickest time of the opening session.

“We’ve got a really, really good race car,” said Johnson, who has raced to the semifinals or better at six of the last seven events. “The guys are doing such a great job and you can see their confidence. You can just see it in the way they walk and carry themselves.

Johnson entered the race weekend ranked fourth in the NHRA Countdown to the Championship Funny Car point standings, but his strong qualifying performance moved him up to third to start race day. While his team has enjoyed a steady improvement in performance, including two No. 1 qualifiers in the first four Countdown events, they have yet to reach the winner’s circle in 2018. Johnson knows that turning on four Sunday win lights will be key to keeping their 2018 championship hopes alive.

“I’d say the only thing we have to change is the semifinals. We have to fix that this weekend. We’ve had a really good car the last six or seven races and we just keep building on it. John Collins is a very methodical crew chief that likes to pick at it, and once he’s close, it gets easy because we’ve picked at it for so long, we know right where we’re at. It’s just small changes and it allows us to be able to step it up when you need to.

Going back-to-back and running quickest of the session twice during the weekend would’ve been sweet enough for the three-time Carolina Nationals No. 1 qualifier, but the cherry on top was to be able to do it in front of family, including Johnson’s mother who has been sidelined with an illness for the better part of the summer.

“It’s pretty special. My mom has been in the hospital a whole lot this summer. Her goal was to get well enough to come out to the races this weekend, and she’s here, so she’s pretty happy right now. It’s really special to me to have her out here. We grew up racing as a family and so to have my mom, my dad, my nephews out here, it’s special. I’m proud of it, but she’s probably even prouder.”

Tommy Johnson Jr. and the Make-A-Wish Dodge Charger R/T Funny Car team will begin race day with a first round matchup versus No. 16 qualifier Dave Richards.

The Competition: No. 16 Dave Richards