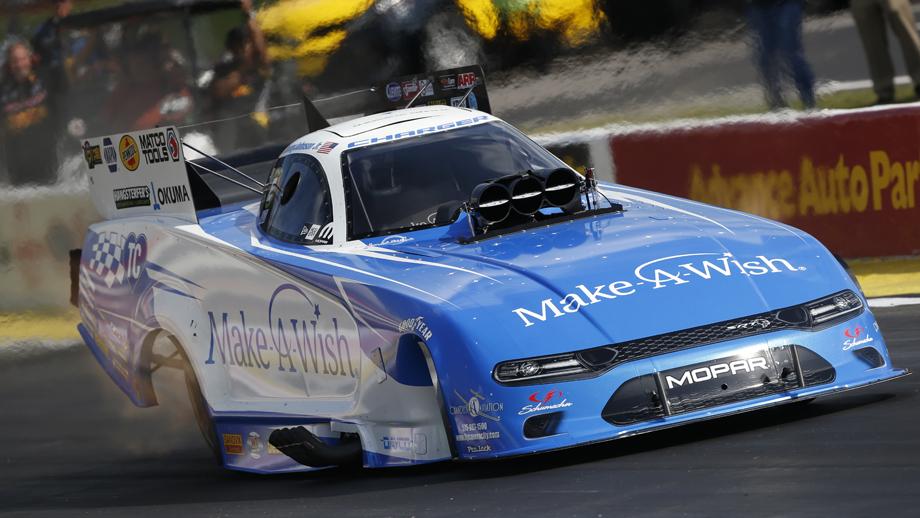 Tommy Johnson Jr. ended a long winless drought last weekend at Route 66 Raceway. Now he knows the challenge is to keep that momentum going throughout the summer.

“It’s tough out here. Winning is hard; even one race much less two in a row,” said Johnson, who now has 19 wins in his career. “It’s been frustrating because we’ve known for a long time that we had a car that should win, but for one reason or another we weren’t getting it done. There wasn’t any specific reason why we weren’t winning. It was just bad luck. We’d make a good run and get beat by low e.t. of eliminations. We just weren’t getting any breaks.”

Johnson does feel that his John Collins-tuned Make-A-Wish Dodge has an edge in warm weather so he’s more than happy to see the thermometer rise in Richmond, Chicago, and this weekend’s race in Topeka.

“At the start of the season, Robert [Hight] was abusing us,” said Johnson. “Their car runs good everywhere but they’re really good when it’s cool so it helps even things up when it’s warm. We think the next few races is our prime time.”

One added bonus that goes with just about any race win is a boost in confidence and Johnson and his entire team are feeling it after their final round win over Hight last Sunday in Chicago. It was Johnson’s first win since the end of the 2017 season and it did wonders for his state of mind heading to Topeka.

“The whole team can feel it; you can see it in their faces, and you can tell by their attitudes,” Johnson said. “We needed this. You try to tell yourself not to get discouraged but sometimes it’s hard. At the same time, a win can cure a lot of things. Even though we didn’t exactly crush them, we got the win and everyone feels good. You can’t wait to get to the next race and go do it again. Thankfully, we only have to wait a week for the next race, but I would have been just as happy if the next race started on Monday.

“In this sport, you learn how to win and sometimes it comes in steps,” said Johnson. “From first round, second round, semifinals, and final, it takes a little different strategy and you have to adjust. We went through a period where we had no problems making it to the semifinals but struggled to get to a final. Then, we had a hard time winning final round. I think I was a runner-up seven times in 2017 and 2018. That gets old.”

Johnson also noted that the engine explosion that he suffered in the final round was little more than a sneeze and didn’t in any way affect the team’s preparation for this week’s Topeka event.

“That didn’t even make my top ten list,” said Johnson. “I’ve had a few this year that were much worse. We did leave that body back at our shop where it’s being repaired for the next race. Otherwise, it wasn’t that big of a deal. I mean we did throw a rod and break an engine but it could have been much worse. Heck, the body stayed on the car. That hasn’t always been the case with me.”