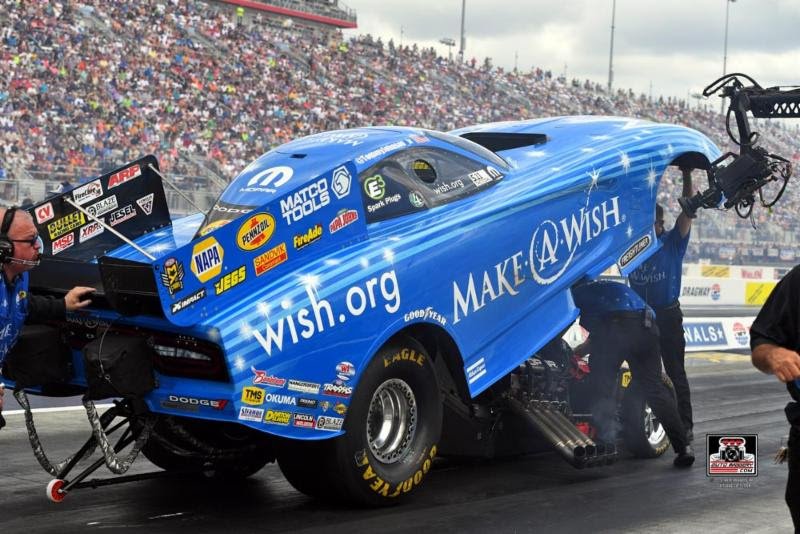 BROWNSBURG, Ind. (May 3, 2017) – Tommy Johnson Jr. is honest about how he feels about Atlanta Dragway: It isn’t one of his favorite NHRA tracks.

This weekend at the 37th annual NHRA Southern Nationals, he’s hoping to change his feelings about the track in Commerce, Ga.

Terry Chandler’s Make-A-Wish Dodge Charger R/T Funny Car team led by crew chief John Collins and assistant Rip Reynold, has never advanced to a final round in the Southern Nationals. Johnson hopes this weekend’s race will have a different outcome.

“In the past, I’ve had some not so great things happen there,” Johnson said. “It’s one of those tracks that you want to break the curse one of these days and see if you can’t win one there.”

The Make-A-Wish team is also looking to get back some momentum from their win in Las Vegas in early April. They have yet to win a round since their win.

“We struggled a little bit the last few races on race day. We did OK in qualifying and were in the top half of the field but just weren’t able to make that successful on race day.”

For two weeks in a row, the Make-A-Wish team has qualified No. 7 and has been knocked out of competition in the opening round by a lower qualified car.

“We stayed and tested Monday after the race in Charlotte and hopefully we learned some good stuff that we can use and get back on track and maybe win some rounds in Atlanta.”

“If the weather forecast stays like it is now, you’re going to probably see the best race we’ve ever seen in Atlanta,” Johnson said. “Usually we go there and it’s hot and humid and with the temperatures they’re calling of now, there could be conditions that we could see some new records.”

The Southern Nationals is the final race of a three-race swing for the NHRA circuit.