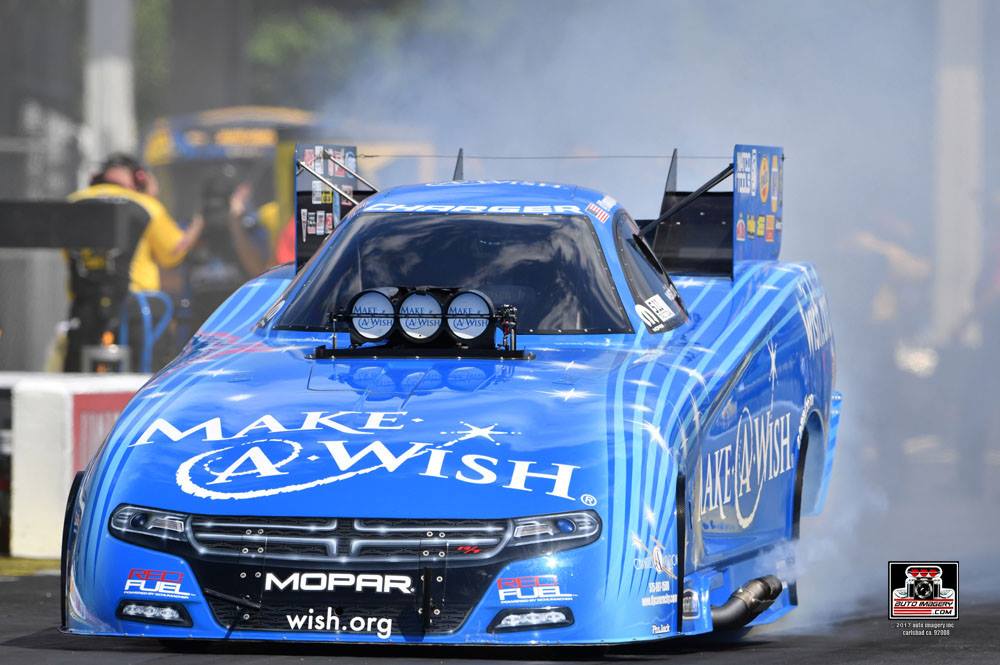 The Make-A-Wish crew hasn’t since the swing started in Houston then stopped at Charlotte before ending with the NHRA Southern Nationals at Atlanta Dragway in Commerce, Ga.

The team won the event title at Las Vegas and moved up to second in the standings before the swing began in the Mello Yello Drag Racing Series standings. But since then, one gremlin after another has bit the team and contributed to it contributed to the team losing the first round for the third race in three weeks.

“It wasn’t the best three-race swing we’ve had,” Johnson said.

The Mello Yello Drag Racing series concluded a three-race swing through the South with stops at Houston and Charlotte before heading to Atlanta.

Johnson and the team, led by crew chief John Collins and assistant Rip Reynolds, entered race day as the No. 3 qualifier with a qualifying time of 3.937 seconds at 319.29 mph in the last session Saturday. They faced their Don Schumacher Racing teammate and Chandler’s other Dodge driven by Jack Beckman and the Infinite Hero Foundation team.

“It hit the bump out there and the tires came loose. We’re confident that we’re close to running really well again. It’s just a matter of a few more runs and we’ll be there.”

In two weeks, the NHRA circuit travels to Topeka, Kan., for the NHRA Heartland Nationals.

“I like racing Topeka. It’s always been a good track for me.

“The guys will go back to the shop. It’ll give them some time to look at the data we’ve gathered. So, we’ll come out to Topeka with the right calls and hopefully go right down through there. I think the car is right on the verge of performing where it had been and we weren’t that bad off to begin with.”