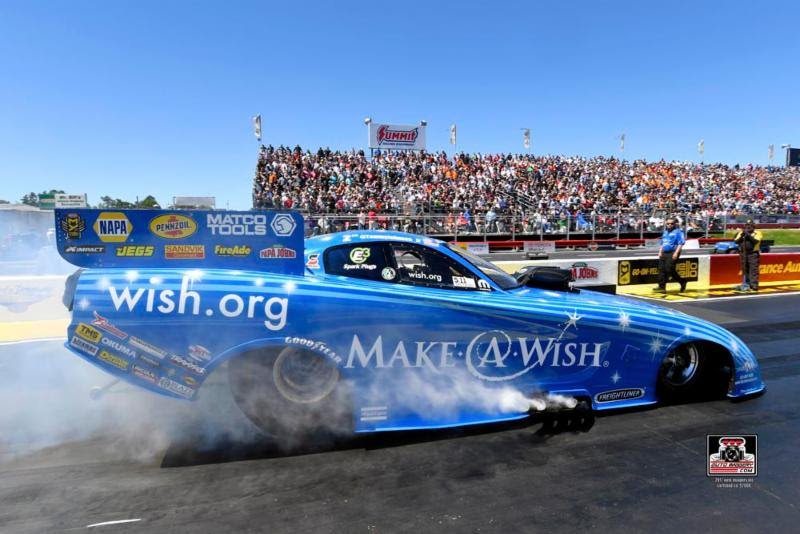 BROWNSBURG, Ind. (May 17, 2017) – It only takesTommy Johnson Jr. three hours to drive from his hometown of Ottumwa, Iowa, to Topeka, Kan.

“It’s kind of like going home for me,” Johnson said of this weekend’s NHRA Mello Yello Drag Racing Series event at Heartland Park Topeka. “It’s close to Iowa so a lot of people I used to race with show up.

“I’ve had a lot of different accomplishments at Heartland Park. I got into the ‘Four Second Club’ there back in the day.”

The milestone was in 1990 when Cragar wheels saluted the first 16 Top Fuel drivers to crack into the 4-second range over a quarter mile.

“It’s a place I always look forward to going back to each year.”

This weekend, the NHRA Mello Yello series travels to Heartland Park for the 29th annual NHRA Heartland Nationals that is eighth event of the 2017 season.

Johnson and Terry Chandler’s Make-A-Wish Funny Car team plan to bounce back from their first-round slump during the three-race Southern Swing that ended two weeks ago.

“We want to try to turn things around. We kind of went a different direction with the tuning of the car but I like we’re were at now,” said Johnson, who won this year’s title at Las Vegas. “We haven’t had the results we’re looking for but we’re close.”

“If you’re going to win later in the season you have to be able to keep working all the time and make yourself better when it really counts. We’re working our way in that direction and this weekend we’ll see the results.”