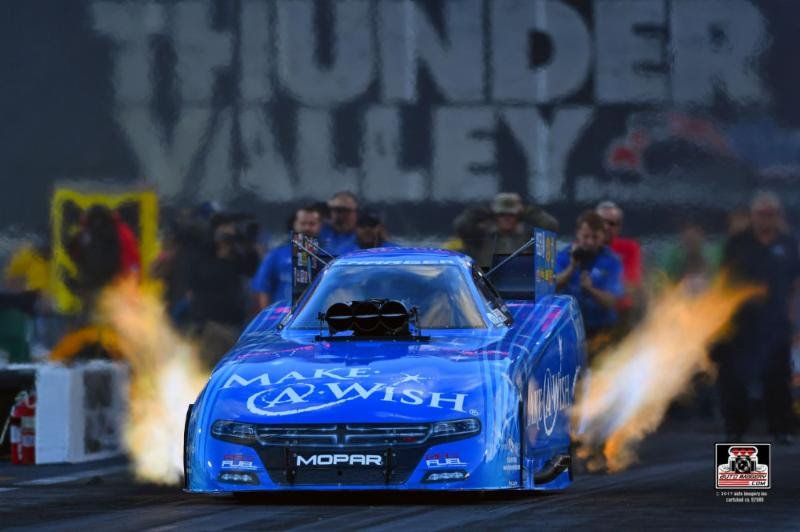 “It seems like things happen for us on Father’s Day weekend so it gives you more confidence than maybe some other race weekends,” said Johnson, who has won at Thunder Valley twice on Father’s Day.

“It’s been a tough weekend for everybody with the hot track conditions we’ve seen. Unfortunately, we missed it a little bit when conditions were better. But I still feel like we’re racing in the hot conditions and we’ve ran well in the heat.”

The team will enter race day as the No. 8 qualified Funny Car with their best effort of 4.000 seconds at 315.93 mph from the final qualifying session. Johnson will face off against Jonnie Lindberg of Jim Head Racing.

The Make-A-Wish Dodge Charger R/T Powered by Pennzoil posted a lap during the heat of the day Friday to open qualifying of 4.050 (309.49) to go low of the round as many other Funny Cars went into smoke.

“We were No. 1 after the first session so I think going into tomorrow, we’ll have a good tune-up for it. We’ve got a lot of history here and it was hot like this last year when we won. So going into race day, I feel confident knowing what we’ve done here in the past few years.”

“Bristol always falls near my dad’s birthday and I’ve been able to celebrate his birthday and Father’s Day with him a few times at the end of the day in the winner’s circle and I’d love to do it again this year.”